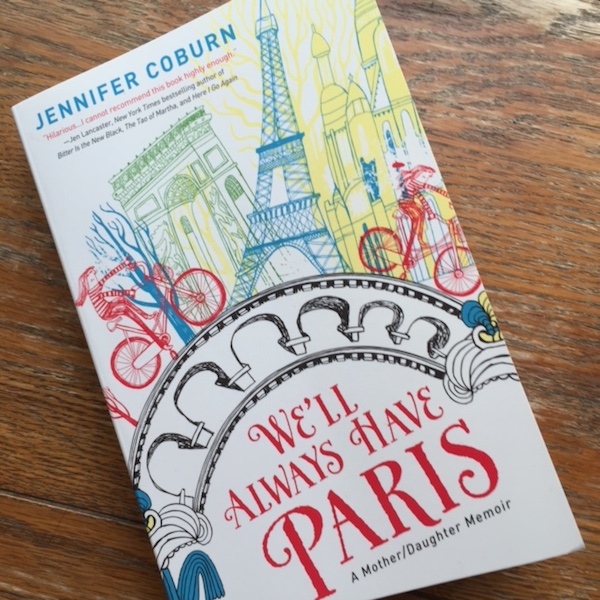 This is not a cookbook. I broke my habit of reading cookbooks and research books on migraines to delve into this charming memoir We’ll Always Have Paris

after I saw the author speak at a local gathering for San Diego writers. She was hilarious and charming in person, and her book is too.

Jennifer began traveling to Europe with her daughter Katie when Katie was eight years old. While this might sound like a grand or snooty gesture, Coburn is neither of those things. Her fear of her own mortality has dogged her throughout her life, along with her fears of falling short as a mother. So she decided to save up, use their frequent flier miles, and give her daughter lots of memories for after she dies. It’s hilarious, touching, and I completely resonated with much of her inner monologue. I also appreciated how Coburn described how they afforded her trips, saving for years, extra planning, and forgoing a kitchen renovation in a particularly delightful negotiation with her husband William.

Coburn lost her father Shelly Coburn relatively young, a victim of his own drinking and drugging as he lived a musician’s life. Her father Shelly is the thread of this book. She moves back and forth in time between recollections of him and her trips with Katie to Paris and London in 2005, Italy in 2008 (Rome, Salerno, Florence, Venice), Spain in 2011 (Madrid, Seville, Granada, Barcelona, and the Dali Triangle), and finally Amsterdam and Paris in 2013. Throughout the trips, the reader sees Katie grow up into a very cool sixteen-year-old, and the author grow up with her somewhat-crazy family… her mother much more settled, her father flitting in and out of her life.

The ghost of her father, and her coming to terms with his death, is a wonderful backbone for the story, as Coburn tries to make sense of the way she was parented and do a better job with Katie. Along the way, her vivid descriptions of the places they stayed, museums they visited, and people they met make an excellent read. I had trouble putting it down. After reading her descriptions of Florence and Venice, I am far more excited about my upcoming trip there.

Her description of getting stoned in Amsterdam had me falling over with laughter, and her touching reminiscence of her father’s last days made me want to give her a hug. I completely related to the panicky feeling of getting luggage trapped in the unforgiving Paris metro entrance, the desire to “check off boxes” of things done and accomplished in each city, and her gradual coming to terms with the loss of a loved one and the greater ability to be present in her life.

We’ll be giving away a signed copy of the book on Friday January 30th!