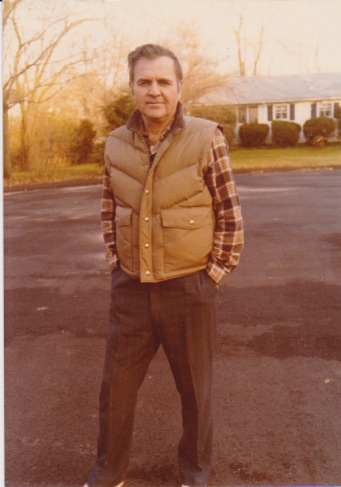 This was my dad, Ken Weaver, in the late 70s, when we lived in Stamford Connecticut. My dad was a photographer his whole life, learning how to shoot and develop photographs at an early age. 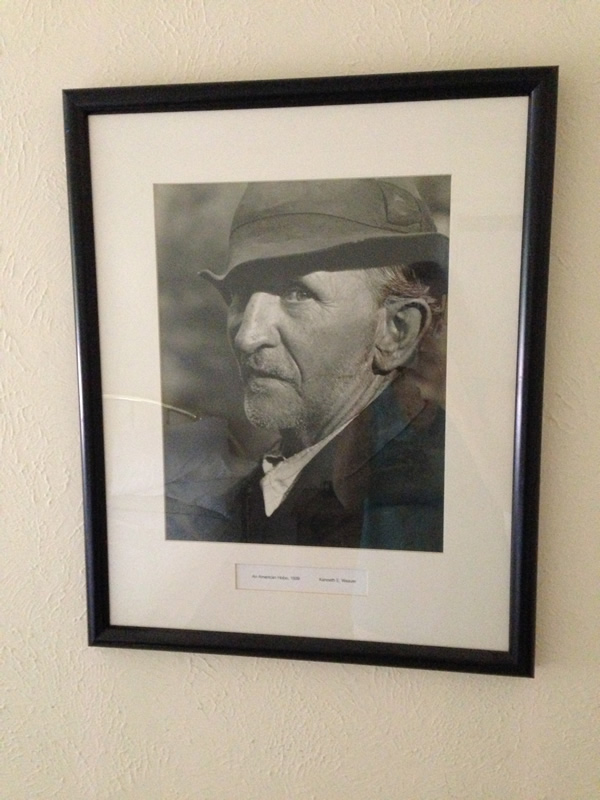 A photograph of a “hobo” (his words) traveling through Ohio some time before World War II. 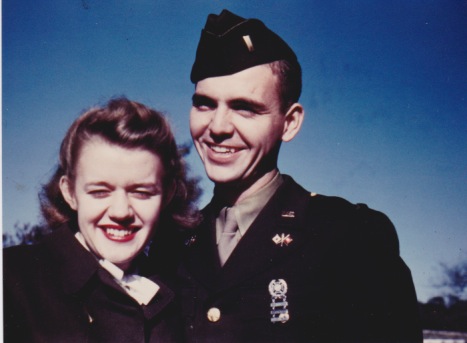 He was drafted towards the end of World War II, parlaying his photography skills into a position with the Army Signal Corps in New York City. He made training films for the Army while in New York, working with another guy named Will Golterman. Will was newly wed to Ruthie Koch, a vibrant redhead from Queens. Will eventually brought him home to meet Ruthie’s sister Dot—my mother—because he wasn’t happy with the boys she was meeting at the USO. My parents married three months after that first date. Not too long after that my dad was shipped over to Germany with the Army of the Occupation, documenting the devastating destruction of Germany’s cities. One of his buddies photographed the Nuremburg Trials. 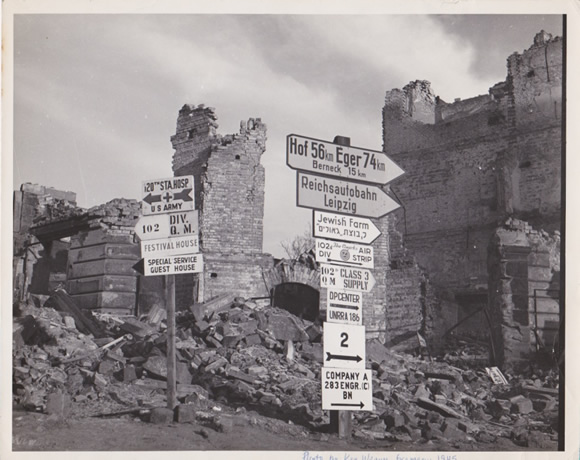 The original black and white photos he took in Germany are beautiful and so sad.

Once home, Dad continued to shoot roll after roll of film, documenting nearly every moment of his young family’s life. These weren’t just baby pictures, they were studio-quality setups of each kid, multiple poses (with varying levels of attention and success), as well as photos of his life on the road as an x-ray equipment salesman.

He shot an entire roll of color film at my uncle’s cabin, all staged, complete with studio lights.

Some of Dad’s work over the years was stunning, especially when he shot in black and white. We all knew he was talented, so much so that we took it for granted. Didn’t everyone’s Dad take tons of pictures of them, of everything? Didn’t everyone have boxes and boxes of Kodachrome slides from their vacations, and a bathroom that was sometimes a darkroom downstairs? 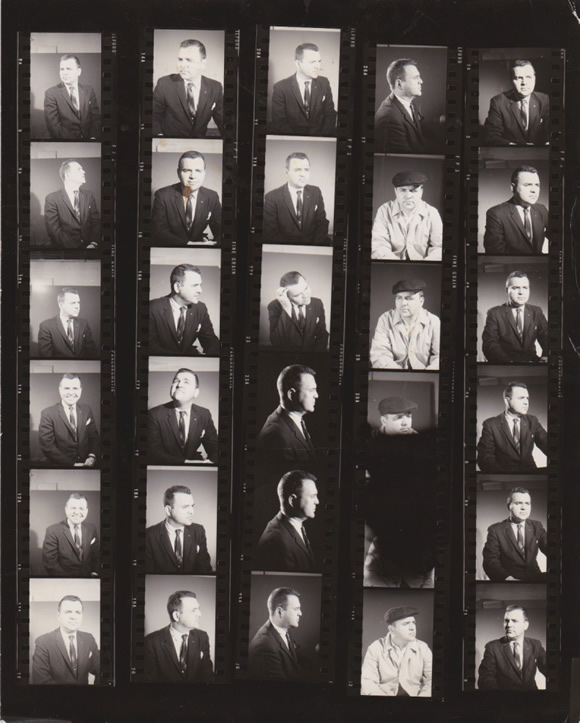 Contact sheets from a series of self portraits. We all thought Dad looked like the comedian Jonathan Winters.

Which is why it was so baffling when, as young adults, we wanted “our” photos, they were nowhere to be found. We all remembered the huge box of prints, mostly black and white, that had always seemed to be somewhere in the house. How could all those photos have disappeared? 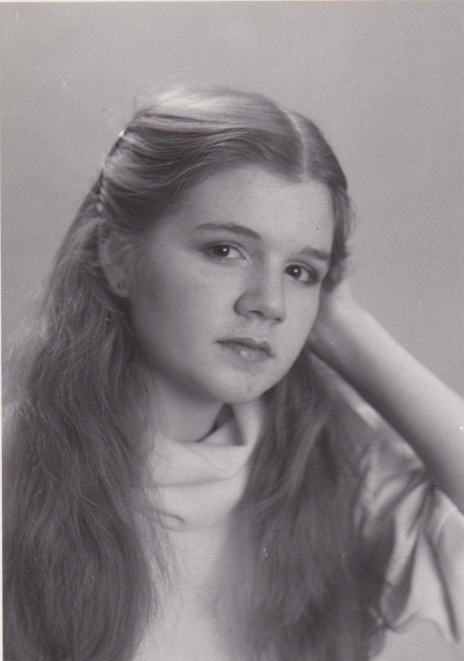 One of many, many portraits he shot of me during my sullen teenage years.

When they got ready to retire, I got the call to come to Connecticut and “get my stuff.” I spent five days helping them sort and purge. My mom said, “Oh, by the way, we found some pictures. They’re in that cabinet downstairs.” And sure enough, in a cabinet the size of a very large dishwasher, they had stuffed all the photos as they unearthed them. Forty years of photos, jammed into that cabinet. I spent three days just sorting photos… one huge envelope for each kid, one enormous pile that my father promised would be a retirement project, making good copies for us all. I went home with my photos, made an album documenting my childhood, and mailed off the rest.

About six months before my father passed away in June of this year, they started cleaning out their home in Boulder, readying themselves for the move to assisted living. Photographs were sorted, many trips were made to the dump, and my sister began collecting envelopes of photographs to give to each of the five kids. Most likely these were the project that dad, ever busy, had not gotten around to. I was there for 10 days, helping stage the house for the realtor. Driving around town one day, I noticed a black plastic film canister in the car and asked my mom about it. “I have no idea. Just toss it.” It was a roll of 24 photos, 35 mm, 200 ASA color film. Since my mom never, ever used the camera, it was my dad’s. His last roll.

I couldn’t toss it, so I packed it along with two suitcases full of things that I either wanted to have or couldn’t bear to throw out. Last week, I took the film in for processing. I had to go to two drugstores; no one develops film any more. I imagined what might be on it… a last vacation, some sweet moments with mom during one of their impromptu picnics, bridge night, a party with friends from church?

When I came to pick it up, the girl said, “So, there was nothing on this roll?”

The photo is of a portion of their backyard in Boulder partly covered in snow. It’s not a great photo, or even a good photo. It’s possible it was an accidental photo, or one he was taking to document some problem in their yard. I will never know why this photo, or why he didn’t shoot the rest of the roll. But I will keep the photo, because it was the very last photo taken by Kenneth Weaver, who lived 90 years and took many photographs of his world. 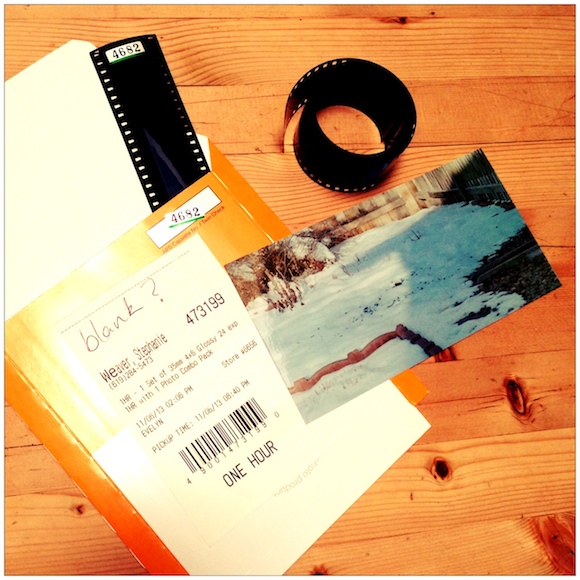 Look for posts on Mondays featuring gluten-free, sugar-free recipes made with healthy plant-based ingredients, Tuesday reviews, Wednesday essays, Thursday how-to’s, and Flashback Fridays recipe posts plus monthly giveaways on the last Friday of the month. We support Meatless Monday. Check out our new Meatless Monday blog hop, a collection of healthy meatless recipes from food bloggers around the world.