Life lessons: the end of summer, and baseball

This time of year is always bittersweet for me. Labor Day weekend in the U.S. signifies the end of summer and back to school. We had a very cool summer here in San Diego; it just started heating up last week. 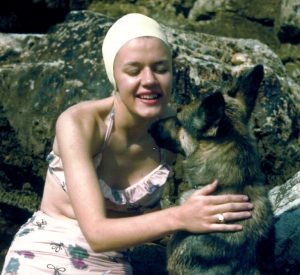 Mom at 21 with her first dog, Andre

Late summer days transport me to a hot August afternoon in Cleveland. We are watching the Cleveland Indians play baseball. It’s 1970. Everyone in the room is splayed out, iced tea at hand, eating grapes off the table. Beads of water condense and drip down the sides of the iced tea glasses, pooling at the bottom, filling the coasters with puddles. It’s too hot to move. Even the dog can’t bring himself to wag.

The game of baseball is perfect for heat, as one can lazily zone in and out with little energy expenditure. At the helm of this group was not my father, who didn’t follow sports, but my mom. My mother had grown up in New York, a rabid baseball town. She learned baseball from the group of boys that she and her friends ran with in Queens. Each boy named himself after a Yankee and would only respond to their player’s name. Woe to the girl who mixed up center fielder Joe DiMaggio with first baseman Babe Dahlgren.

Mom had a love for the game that transcended location. She was unlike the fans I know now, who bring their allegiance with them across the country. Mom adopted the team nearest their current house, following religiously along, then dropped that team for the next as the family moved to follow my father’s jobs.

She was a multi-tasking fan, always working on a crossword puzzle, knitting project, or library book, her hands rarely idle. She never followed the box scores and wasn’t a statistics quoter. Her love for the game included yelling at the wavy image on the television whenever things weren’t Going Our Way.

I remember the heat, and the boredom, and the tea, but never found baseball boring. People who find baseball boring don’t get it. It only seems boringâ€¦ what they don’t realize that at any moment wild action can erupt. Yes, that wild action is punctuated by long stretches of seemingly nothing, but it can be breathlessly exciting all the same. Which is why it’s perfect for hot days. You can sit, facing roughly towards the television, so close to being asleep, until the crowd’s shouting rouses you and you’re following along with the triple play. In the days before instant reply, you had to pay attention or you’d miss the best action. 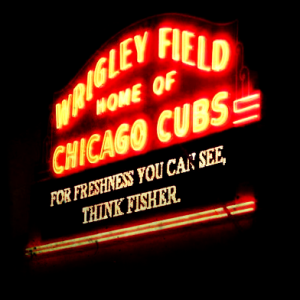 By Scottsusin (Own work) [CC-BY-SA-3.0 (http://creativecommons.org/licenses/by-sa/3.0)], via Wikimedia Commons

When I moved to Chicago to finish college, my first apartment was a block away from Wrigley Field. Now there was a baseball stadium. Right in the heart of a neighborhood, those beautiful ivy-covered walls just begging for homers. I went to games with my friend Beth, who did follow the box scores. We got there for batting practice so we could watch the team warm up. It was an all-day affair, a relaxing way to spend an afternoon, as timeless as I remembered it.

My last Chicago boyfriend was a sports fiend; ESPN was on all day. I remember watching the Cubs playing the Padres with him. It could be sleeting in Chicago in May; it was always sunny in San Diego and there were palm trees in the stadium. I left the boyfriend behind with the sleet.

Once I moved to San Diego, I stopped following baseball, perhaps from the overdose of ESPN. My new husband didn’t watch sports, and I didn’t miss it. I didn’t realize how much baseball and summer are inextricably linked for me, though, until I went back to Mom’s.

My Dad passed away in June, and I spent a week in Boulder helping Mom clear out the house before listing it. All work stopped once the Rockies games came on, with Mom in her chair, iced tea at hand, crossword on the table, knitting by her side. It was a full circle moment I didn’t realize I had missed until I was there again, watching a team I don’t follow, playing a sport I still understand deep in my bones.