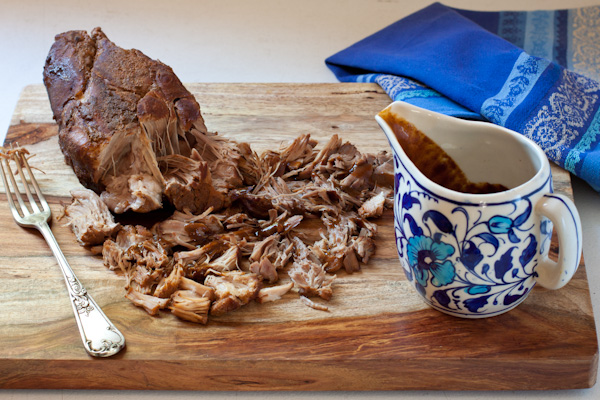 This pulled pork is simmered with a killer barbecue sauce that goes together in the blender in five minutes. Load up the slow cooker with root vegetables of your choice and eat for days. This is a Cooking Light recipe renovation.

Now that we’re eating meat again, and I try to eat paleo as much as possible, I’m always looking for ways to easily make a lot of servings at once, making dinners easier. I loved the sound of this Cooking Light recipe, so I renovated it to fit my migraine and low-sodium diet. So good.

How I renovated this recipe

The original recipe called for pre-browning the pork to give it a crust. While I’m sure that adds deliciousness, the idea of making yet another pan dirty didn’t excite me on a blazing hot day, so I tried the recipe with no browning. I eliminated the salt altogether, swapped white pepper for black pepper, which I felt would go better with the pork and peaches, greatly reduced the amount of vinegar and substituted white vinegar, reduced the molasses, cut the soy sauce, reduced the red pepper, added a few other spices, and used frozen peaches instead of peach preserves. In my version the bourbon goes right in with the sauce, why not slow-cook it all in bourbon? The result was dinner-party-worthy pork, for about 10 minutes of prep. A winner. I made the happy food dance for three days. I have made this with and without bourbon (for the strict migraine diet) and it’s delicious both ways.

I load up the slow cooker with chunks of carrots, potato or sweet potato, turnips, parsnips, rutabagas, or hearty squash.

Not for:
vegan or vegetarian diets 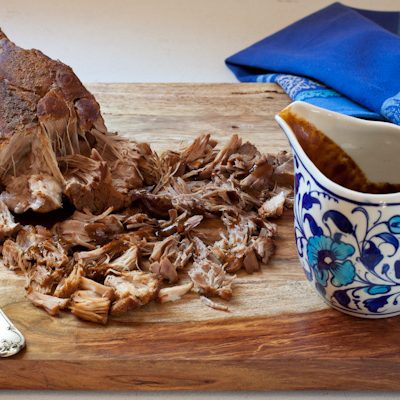 Per serving of meat and sauce (no vegetables):