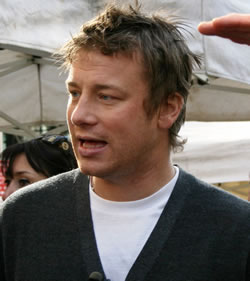 I originally wrote this post as part of a blog hop on celebrity crushes.

Why choose Jamie Oliver as my celebrity crush? Not because he’s adorable, although he is. Because he has used his clout as a celebrity to bring attention to childhood obesity, focusing on the horrific state of school lunch programs in Great Britain and the U.S.

His 2010 show Jamie Oliver’s Food Revolution is responsible for me starting this blog. I watched in sadness and despair as Jamie went into people’s kitchens and tried to show them how to cook real food. I knew people in the U.S. were eating poorly, but Jamie’s show showed in stark detail just how poorly, and how great the need was for more education and activism. By the end of the series I vowed to start a food blog, hoping that I could help be part of the solution by providing how-to and inspiration for eating healthy, beautiful, delicious food.

Jamie has a deep love for healthy food and fresh ingredients. If you haven’t seen his BBC show Jamie At Home, try to catch it in reruns. His enthusiasm is infectious, and my cooking improved immensely watching him. He also can be found on 15-Minute Meals on some cooking channels.

Jamie won the TED Prize in 2010… Did you know that this generation of children is the FIRST EVER expected to live shorter lives than their parents? Neither did I.


Jamie has caught a lot of flack for coming to America and telling us how we should be doing things. I, for one, love his passion and hope he never gives up. Thank you, Jamie, for inspiring me.