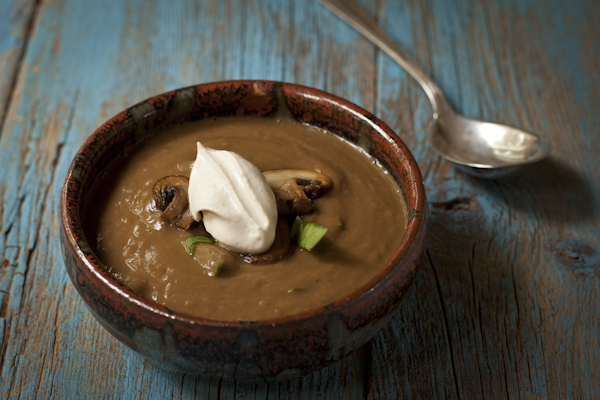 This warm, hearty soup was inspired by a recipe I tasted at the Produce Marketing Association‘s Fresh Summit in October, at the Giorgio mushroom booth. It’s perfect on a cold winter’s day with a dollop of vegan creme fraiche (like sour cream). The heat of the soup wilts the spinach, so you get all the health benefits of fresh spinach in a bowl of toasty goodness.

It’s been very cold in San Diego this winter, with temperatures in the low 40s every night. While that’s not cold compared to other locales, most houses are not insulated and many people don’t have heat, so it’s pretty nippy. I’ve been making tons of hot soups to ward off the chill, and this one was so delicious I had to renovate it to make it vegan. I thought topping it with a little creme fraiche to stir in would add just the right amount of decadence, but you can skip this if you like.

All of our recipes are gluten-free, sugar-free, and made with plant-based ingredients to help you build a healthy life. We support Meatless Monday. Look for midweek essays and Friday giveaways (when available).

I buy my Bragg’s in very large bottles, and refill a small one to use when I cook. 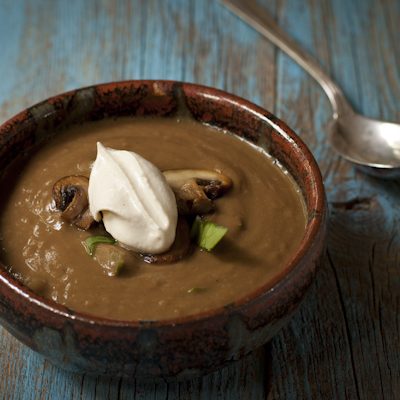 Per serving: The original recipe called for sherry, but I prefer the taste of marsala wine. If you don't have either, use a dry white wine. You can use any combination of button (white) mushrooms, shiitake, oyster, and cremini or baby bella mushrooms. The more exotic mushrooms are more expensive but do add amazing layers of flavor. If you can buy them loose, use them for the garnish at the end. The creme fraiche is similar to my sour cream recipe, except there is more lemon juice, a little more salt, and you soak the cashews longer.