Should failure be a goal?

These mushroom burgers seemed like a good idea at the time. Recipe NOT coming to a blog near you.

I’ve been thinking a lot about failure. First I watched Brene Brown’s inspired TED talk, where she labeled TED the “failure conference.”
I can be ALL OVER THE PLACE when it comes to setting goals, sticking to them, following through, and keeping focus.

When Brene Brown says that vulnerability isn’t weakness, and that getting up on stage and showing our vulnerability is the bravest thing we can do, we all instinctively get that.

In the first episode of a series that ran on Yahoo called Failure Club, creator Morgan Spurlock said that the show itself is “my failure club,” as he unsuccessfully pitched it to network after network for seven years. Their response, “Pitch us a show called the Success Club, and preferably we’d like to see the people succeed in 8 weeks, 13 tops.”

Instead, the Failure Club’s co-creator Philip Kiracofe told the group, “We want to make failure a magnificent benefit in your life.”

It also struck me that this notion of The Critic (which came out in the writing workshop I just took) was rampant in all of these people’s inner dialogues. Direct quote: “For Lesson Two I’m expecting: more pain, more fear, more humiliation…”

But as they continued to meet, continued to set small goals and push themselves to achieve them, they began to show truly inspiring inner growth, if not outward success. 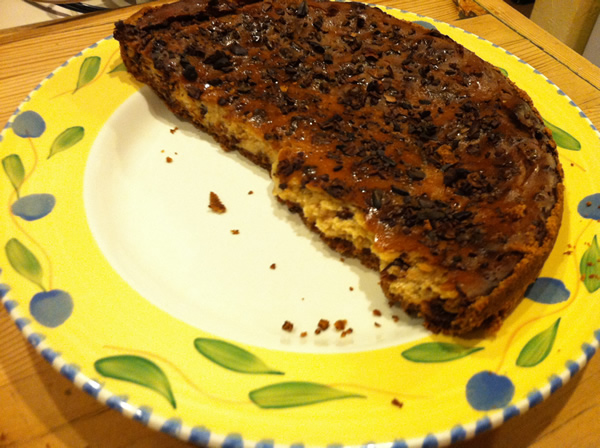 A truly terrible cheesecake I made that went straight into the dumper.

As I continue to push myself to try new food combinations, offer classes, and move out of my comfort zone, it’s inevitable that I’ll be feeding the compost pile.

But mostly I am just plain inspired by the idea of embracing failure, like a cold glass of water right in the kisser.

What would your big, hairy, audacious goal be, if you weren’t too afraid to fail?