Saying goodbye to my friend Pete 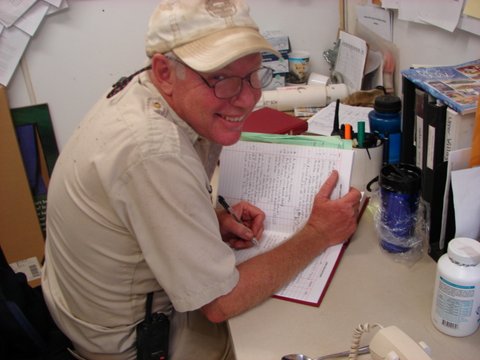 This smile captures him perfectly

Two months ago a dear friend of ours died suddenly. Pete Andrews and his family lived across the street from us for 12 years before moving to their dream home last summer. In a year filled with loss, this death hit me very hard. I thought of Pete as a brother; they are family to us. I have avoided writing this post because it was too difficult, but wanted to share a little bit of him with the world. Since his death, I always say I love you to everyone I love, on every phone call. Because you never know.

Pete and I worked at the San Diego Zoo in the Education Department. He was one of the five people who interviewed me for my job, and for most of the time I worked there, the only man in a department of two dozen or more women. 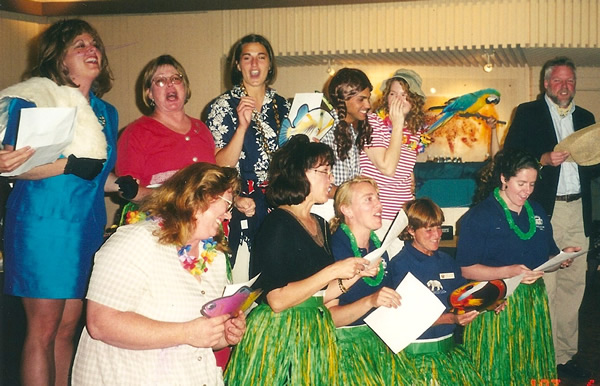 Pete had gone gray early in life, and had the rugged handsomeness of Peter Graves or Mark Harmon. Pete was like an easy-going brother, although he could be tough on the educators who worked for him. He set a high standard to keep the animals safe, worked his ass off, and was my go-to guy to make something happen for an education program. 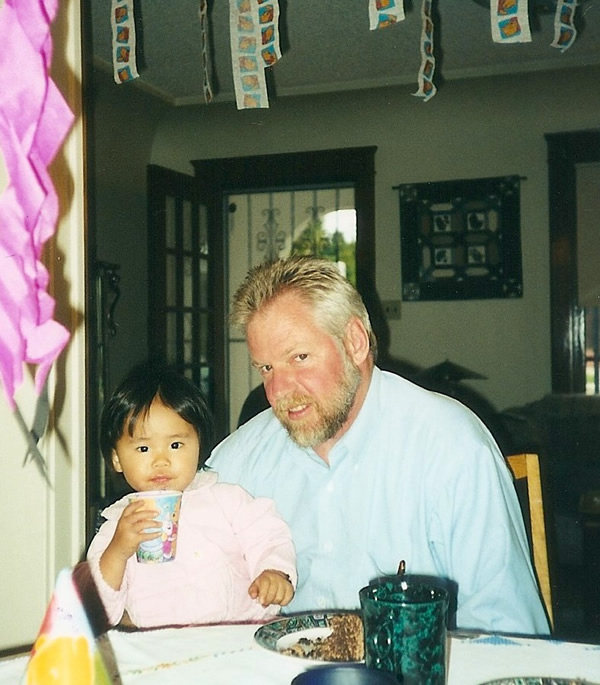 Pete with Callie at my birthday party in 1999

He was hilarious, too, and could spin many an entertaining tale over lunch. He was semi-addicted to Red Vines, and always seemed to be chewing one when I would stop by his desk to ask for help. He was the low-key, make-it-happen guy, even keeled, and had the kindest heart of anyone I knew. If we had a problem, we’d start with Pete.

He and his wife Steph had been trying for years to have kids, and not too long after I started working at the Zoo they found out that their Chinese adoption was going through.

He and Steph were the first people to meet The Husband, as we headed up to Temecula on our third date. We saw their adorable nursery, so long awaited, and we counted the days for them to come home with Callie.

At that time, Pete was working at the Zoo and trying to finish his degree, doing a killer commute and now had a new baby. One night he fell asleep and started driving off the road, awakened by his truck bumping over the bots dots that line the highway. They needed to move closer to work. 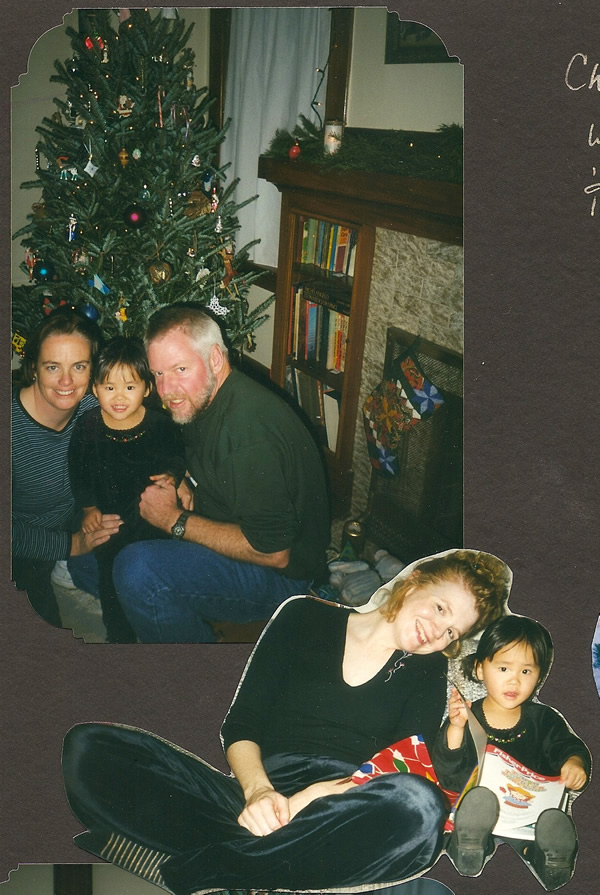 The house across the street from us had just vacated, and we were thrilled when he and Steph decided to move in with Callie, their birds, cats, and dog. Callie was a little thing, barely walking, but she took a shine to Bob from the start, and we asked them if she would be our flower girl. 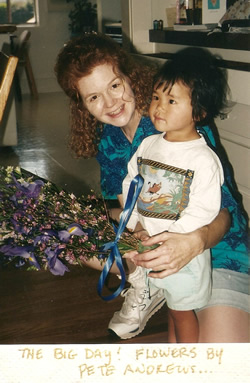 Pete was a man’s man, a guy’s guy, who spent most of his working life around women. But Pete also knew flowers. His father had had a very successful floral business in Baltimore, doing flowers for the White House and the Lake Placid Olympics. It didn’t take too much convincing to get Pete to come out of retirement and do the flowers for our wedding. Pete and I went to a wholesale flower mart to choose the flowers where I saw a completely different side of him. He absolutely hated gladiolus, because he said they were funeral flowers, but I convinced him to put a few pink ones in anyway. 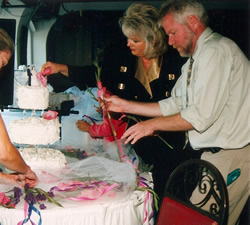 We had a small, DIY wedding, with many, many friends helping in various ways. He did an outstanding job in a short time frame at a location that presented some odd challenges, and from then on I called him Pierre La Fleur. 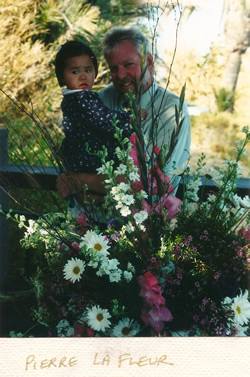 Two years later Pete and Steph adopted Skyelar, and we got to watch the girls grow up. We didn’t see them often, as their lives outside of work revolved around the girls’ activities: gymnastics for Callie, ballet for Skye, Girl Scouts, school outings, dog beach every weekend with Star. They always made time to stop by our backyard parties, though, and I have a series of these photos with the girls maturing. 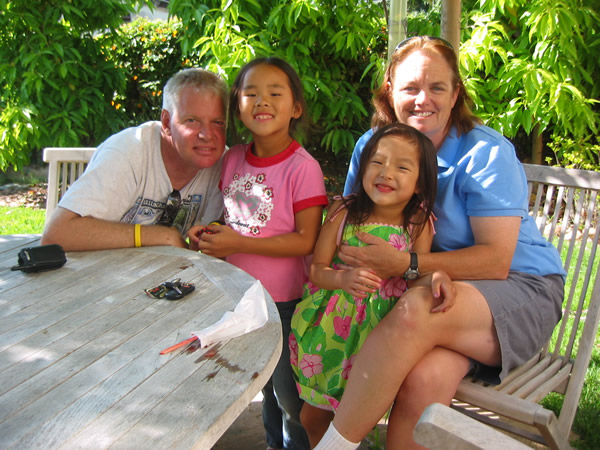 Our dogs played together, and Buddy Girl spent many overnight visits at their house with her best friend Star. I never once had a moment’s pause if I left Buddy with them, and if she ever got hurt, they were my first call. The night she got skunked and The Husband was out of town, they came right over, tomato juice in hand. And so it went.

As the years went on, I mostly saw Pete for sidewalk chats as he came home from work, or was transporting the girls to an activity. One talk in particular stands out to me. Pete had left the Zoo to take a big leap of faith for his career. It hadn’t worked out as he and Steph had planned. He confessed that he felt ashamed he’d failed, and didn’t know what to tell the girls. I told him that I thought that failing gracefully, and picking yourself up with a good attitude and starting over, was the best thing he could possibly teach them. I know that he was successful in this, as his girls would never think of him as a failure, and that his outstanding work ethic will stand them both in good stead as they grow into adulthood.

When, after 12 years, they found a house to buy, we were excited for them but sad to see them go. Steph invited us over for a surprise birthday party for Pete last December, and she flew in Maryland crabs. 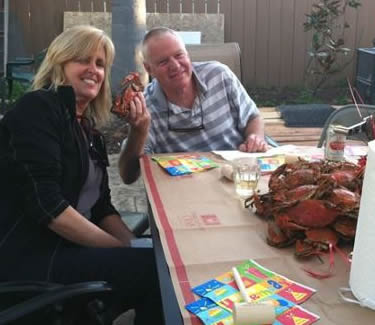 Pete with his best friend Jamie, about to annihilate that pile of crabs.

Two weeks later when we found out Buddy was sick, they all came to say goodbye, bringing her friend Star for one last visit. When we had Buddy’s burial ceremony in February, they all came to celebrate her. They are the kind of friends I confess that I used to take for granted, because they have always been there for us.

It was simply stunning to get the call on June 28 that Pete had died. He had come home from work at 4 pm. Steph arrived at 4:45 to find him on the couch, phone in hand, taken by a heart attack at 55. I drove up to be with her that evening as soon as I got the call, and we will continue to do whatever we can to help and be their friends.

One thought came to mind as I was driving home that night. I had been disappointed that Buddy didn’t “come back” to us, sending Daisy instead. But then the thought popped into my head, “She was waiting for Pete. She knew that Pete was coming.” And I could just see her, in that tunnel of white light, not even waiting for him to cross all the way over, but joyfully sprinting up to him and spinning around to be petted, welcoming him to heaven.

Pete, it does not feel like it was your time to go, and there’s nothing good I can yet find in your leaving. But I know without a shadow of a doubt that you are in heaven, playing fetch with Buddy Girl. Bless you, my friend. 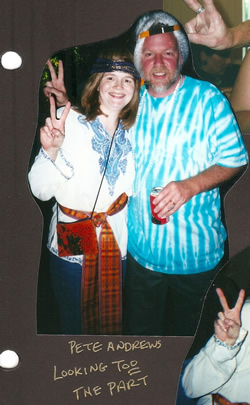 After 15 years of friendship, the only photo I could find of me and Pete, dressed up for a “Hair”-themed party. And no, he is not stoned.

I dedicated my book to Pete, and in his honor am donating 10% of the profits to animal-related causes: Golden Angels: A Pet Loss Memoir