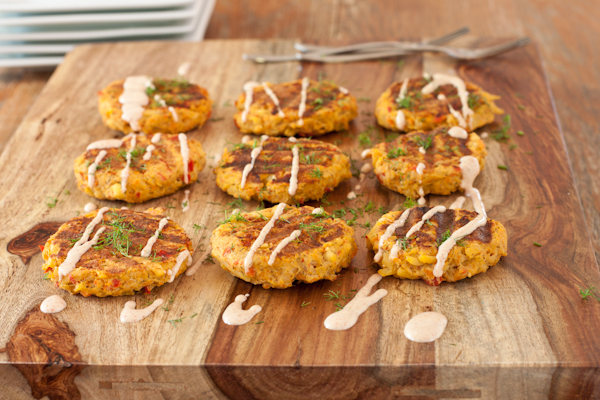 This is a new recipe I’ve been working on since going low-sodium, salmon potato cakes. I use Trader Joe’s canned Alaskan pink salmon with no salt added.

It took a lot of tweaking… I started out using my Mom’s thick fritter batter recipe (gluten-free, of course), and evolved into a grain-free patty with the focus on the fish. Carrots and red pepper help make it a complete meal, should you decide to forgo eating anything else. I would serve these with a side salad.

I used frozen Ore-Ida hash browns (which are super low-sodium, but do contain a little dextrose to keep them from browning), making this truly quick to throw together. Of course you can quickly grate your own potato instead. If you don’t eat white potatoes, grated sweet potatoes would probably be a wonderful stand-in, especially if you’re strictly on the paleo diet.

After trying these in a frying pan, I finally pulled out my new George Foreman grill, which cooked them perfectly in five minutes, adding lovely grill marks on both sides. Super easy, and quick to clean up too, because the new model I have has removable grill plates. It’s much easier to clean than our old Foreman grill, which I still loved anyway. We’ll be giving away a new Foreman grill at the end of the month, so stay tuned!

Not for:
vegan diets

You might also like:
Salmon-sweet potato cakes (paleo) from The Little Honey Bee
Paleo salmon cakes from Everyday Maven 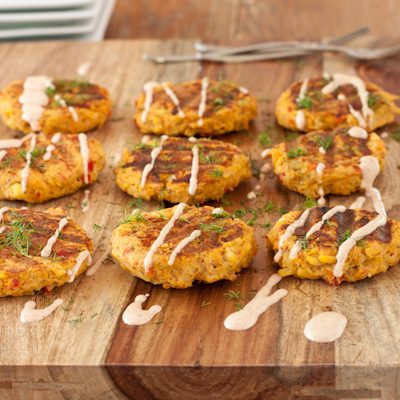 Per serving: Top with Joe's Mustard sauce or another creamy sauce and fresh dill if available.