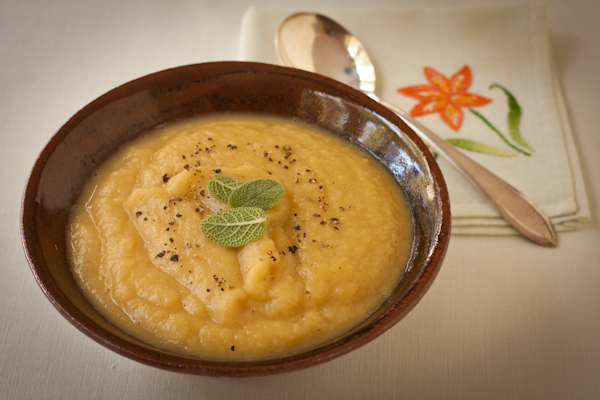 Welcome fall with the deep autumn flavors of parsnips, leeks, sage, and nutmeg.

After college I spent a lot of time in Nashville with my friends Michael and Billy. We were headed to a movie late one night and stopped at a grocery store to load up on snacks. In front of us in the checkout line was a thin reed of a man who might now proudly proclaim himself a redneck. Back then, I might have said hillbilly. At 9:30 pm, this man was buying several large bags of leeks and nothing else. My curiosity finally got the better of me; I had to ask.

“Excuse me, I’m so curious. What are you planning on doing with all those leeks?”

He turned to look deep into my eyes, and spoke with a heavy country drawl. “Well, ma’am, I just had me a taste for vee-shee-swahz tonight, and I had plenty of potaters at home.”

Abashed, I realized I had jumped to conclusions about him based on his appearance. I wished him good night and hoped he enjoyed his soup.

Whenever I buy leeks, I think of that guy. This time, the leeks came from Melissa’s Produce. 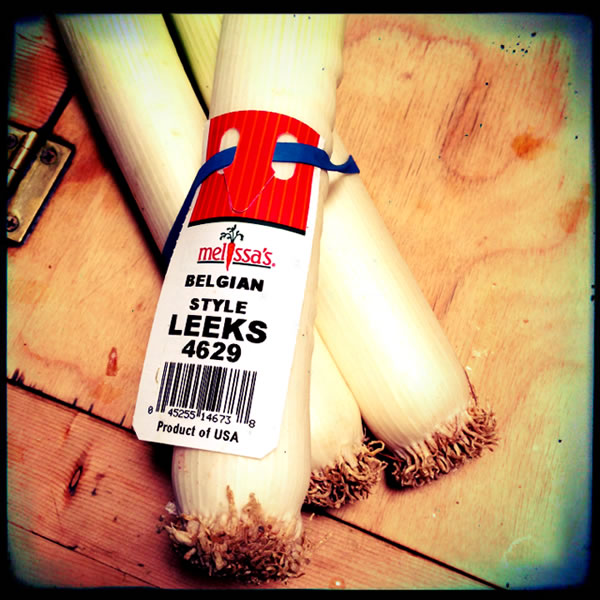 (review tomorrow) and it inspired me to try something similar: a cross between vichyssoise, a cold potato-leek soup, and something more autumn-like. I substituted mild parsnips for white potatoes and added sage and freshly grated nutmeg. Enjoy!

Today’s post is part of our mission to help you rebuild your health through food and lifestyle choices. Look for posts on Mondays featuring gluten-free, sugar-free recipes made with healthy plant-based ingredients, Tuesday reviews, Wednesday essays, Thursday how-to’s, and Flashback Fridays recipe posts plus monthly giveaways on the last Friday of the month. We support Meatless Monday. 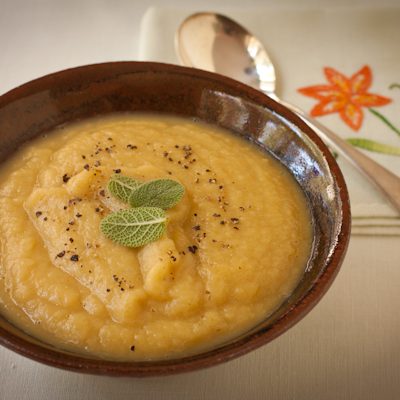 Per serving:   Serve topped with a little freshly cracked black pepper, fresh sage leaves, and a drizzle of flavorful oil for garnish. If you want to make this a chunky soup, chop or dice the vegetables more neatly before cooking. Once the parsnips are tender, remove a cup or two of veggies and broth and blend until smooth, then add them back into the soup pot for a chunky soup with good body.