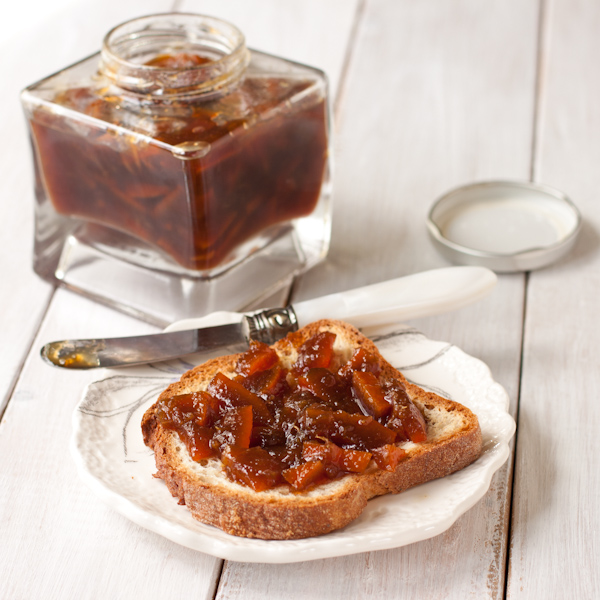 Marmalade stands alone, in a camp of its own making. It’s not the sweet clear jelly that every child loves. It’s not even sweet chunky jam. It’s tart and sassy, and I’ve always adored it, perhaps because it was one of my Mom’s favorites too. This is an updated, low-glycemic take on classic marmalade with a little twist. It could be easily mistaken for a chutney, and I may well add a dollop of it to my next plate of Indian food.

Marmalade is distinguished from jam by the addition of the citrus peel, and these Seville oranges are traditionally used in Great Britain for marmalade, combined with white cane sugar and water. They have a high pectin content, so the marmalade sets well. The name marmalade comes from the Portuguese, and originally referred to quince jam. I added fresh ginger and a little fresh thyme, and used organic coconut sugar and agave syrup to sweeten it, which gives it this lustrous dark color. I turned to Joy of Cooking

as a starting point for this recipe.

Cover your work surface with old towels and put on your apron so that when it splashes, it doesn’t stain anything important.

Heat the lids in simmering water. I leave the pot on low, as I can only get four jars in the boiling water bath at one time. Bring the jars to a boil in the pot, then turn down to low. (My pot only holds 4 jars at a time, so once I remove them I put in the next batch.) Use tongs to move the jars, and a hot pad underneath to steady them as you move them around.

Fill each jar to within about ½” from the rim. Wipe the edge and threads clean with a damp clean towel. Remove lids from the water bath with the tongs, and place on the top of each jar. Use a towel, not your fingers, to place the lids on.

Screw on the lid until tight but don’t over-tighten.

Place the jars in the boiling water bath using the tongs, and cook for 15 minutes. I have the water boiling pretty rapidly when I place them in there, as the jars will slow down the boil. Adjust the heat so the water is just boiling but not too active. You don’t want them bouncing around in there.

After 15 minutes, pull the jars out with the tongs and set them on a towel. When they are fairly cool, place them in the refrigerator to set the jam. You should hear the lids pop as they settle.

Test the seals by removing the band, and picking up the jar (over the towel) by the lid. If one pops off, then you’ll need to eat that one first and keep it refrigerated. Enjoy!

All of our recipes are gluten-free, refined-sugar-free, and made with plant-based ingredients to help you build a healthy life. We support Meatless Monday. Look for midweek essays and Friday giveaways (when available). 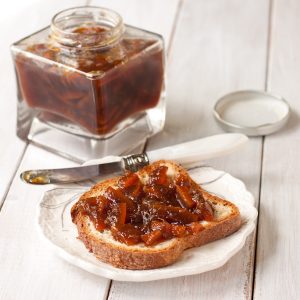 Per one tbsp: If you don't want to go through the canning process, you can store the jam in sterilized glass jars in the refrigerator. It will last about two weeks. Seville oranges, which are in season now, are traditionally used for marmalade. You can use any type of orange. Thin-skinned oranges with sweeter rinds will yield a sweeter marmalade, so you won't need as much sugar. Required FTC disclosure: Melissa's Produce provided the Seville oranges. I was not paid to write this post.