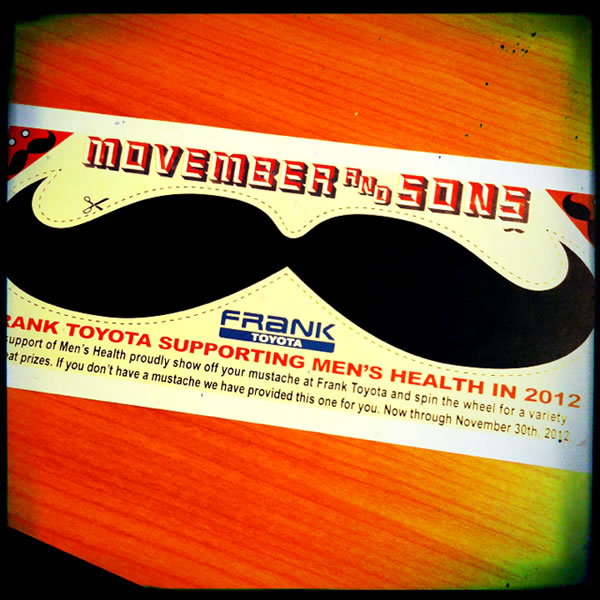 You might have thought it was NOvember, but it’s really MOvember. In case you haven’t run into a gentleman in your life who is sporting a newly grown mustache, let me tell you about this wonderful, fun charity effort. While women have October for breast cancer awareness, men’s health issues have not had that kind of visibility. Enter MOvember, which was started to raise funds and awareness for prostate cancer and treatment.

I have known a few guys, and local bars, who have participated in the past, but none are quite as entertaining as founder Adam Garone.


“Essentially, I”m a mustache farmer. And my season is November.” Adam Garone

What I really appreciate about this effort, aside from the fantastic fundraising, is that guys generally don’t talk about their health, don’t go to the doctor enough, don’t get enough screening tests, and often have to be pushed to take care of themselves. So this guy-backed effort seems to hit the mark. I remember one year when The Husband came home from a trip overseas and was sick, really sick, for three weeks, but wouldn’t go to the doctor. I’m not a wife who likes to play games, but finally I suggested the possibility that perhaps he had picked up a parasite. Bingo! Into the doc’s office the next day. [I knew he didn’t have a parasite but also knew he needed to get into see the doctor. Sigh.]

I loved getting this piece of mail from a local car dealership with a cut-out mustache in support of the effort, as it tells me it’s gaining ground in important ways. It’s not too late to start growing your “hairy ribbon” or to donate. If you are growing a MOstache, please send me a photo to include in this post and on Facebook!