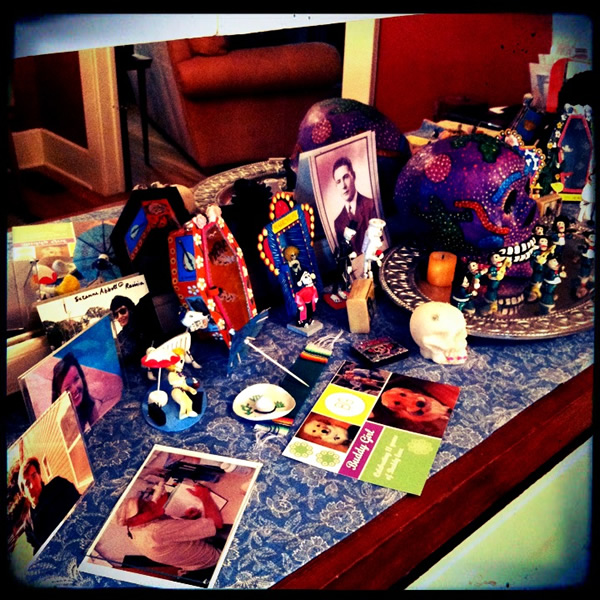 I recently took part in a profound conversation on Facebook about whether people were afraid of dying.

I lost three people the year I was 16: a classmate to a freak accident, my 17-year-old cousin, and a friend’s grandfather. It changed me profoundly, as I lost that sense of immortality that all teenagers have.

I’ve lost people over the years. But last year, 2012, things changed. We lost our beloved dog on January 2nd, followed by seven family members over the next 18 months. I ended up writing a book on grieving, as it was such a part of our lives.

For me, creating rituals around the grieving helped immensely.

Our culture sucks at grieving. We don’t talk about it, and death is something to be feared. We no longer sit with our loved ones who die, sit with their bodies in that sacred space. We no longer prepare their bodies tenderly, washing them and dressing them. It’s all hidden, feared, whisked away. And so we don’t know how to deal with it.

I love the Mexican tradition of Dia de los Muertos. The holiday begins on October 31 and runs until November 2nd, encompassing All Hallow’s Eve, All Saints Day, and All Souls’ Day. It’s traditional to put up an altar to remember loved ones, including their photograph and some of their favorite foods. Yellow candles and special marigolds are meant to light the way for their souls to return. On the 1st and 2nd, their favorite meals are prepared and then carried to the cemetery for a picnic on their grave.

We put up our altar the first weekend of October. It made me a little sad this year, because there were so many new photos, including my father who passed away in June. But it’s also a way to remember and honor those we loved in this life.

I’m not looking forward to death, but I truly know it is inevitable. I take good care of my body, because I was very sick ten years ago and want to cherish feeling well and be the best I can be at 52. But I have stopped worrying about the wrinkles and covering the gray hairs. I embrace 52, and try to appreciate every day that I have, and the people I love surrounding me.

And I believe that we will see each other again, in some way. For now, I light my candles and invite them back for a visit.