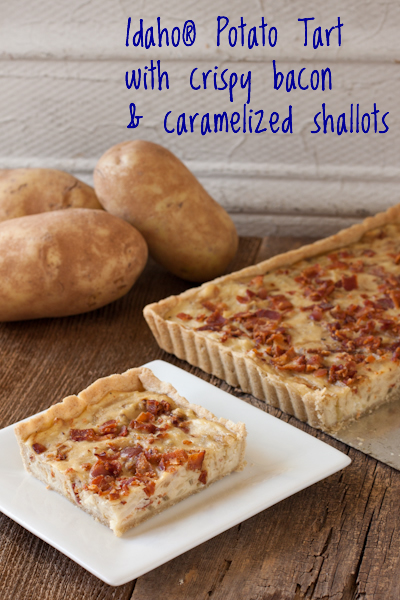 I am happy to present this yummy potato tart, as part of the Idaho® potato celebration going on at Idaho® Potatoes. I was trying to make a version of this work for my migraine diet book, but the testers had trouble with it for a variety of reasons. When I attended a dinner sponsored by Idaho® potatoes for local San Diego food bloggers, they invited me to rethink it for their website and this post. After working out all the issues, I even made a video!

If you haven’t made pie crust before, this is my new-and-improved gluten-free pie crust. You can also use cold butter in this recipe if you wish instead of coconut oil. The nice thing about room temperature coconut oil is that it works! It makes a beautiful flaky crust that no one ever thinks is gluten-free, it’s already dairy-free, and it doesn’t have to be chilled, as it’s already the perfect consistency at room temperature.

I made the crust first so that it could rest while making the filling. I started the bacon, boiled the potatoes, and then caramelized the shallots in some of the rendered bacon fat once the bacon was done. After that, roll out the crust, mix together the filling, and top with reserved, crumbled bacon. Sooo tasty. Vegans and vegetarians can omit the bacon (or use coconut bacon. Just mix it all into the filling, don’t leave any on top or it might burn). Vegans will need to use an egg substitute.

This post is sponsored by the Idaho Potato Commission and I received a stipend from them for my recipe, photographs, and video.

Not for:
salt-free, migraine diets 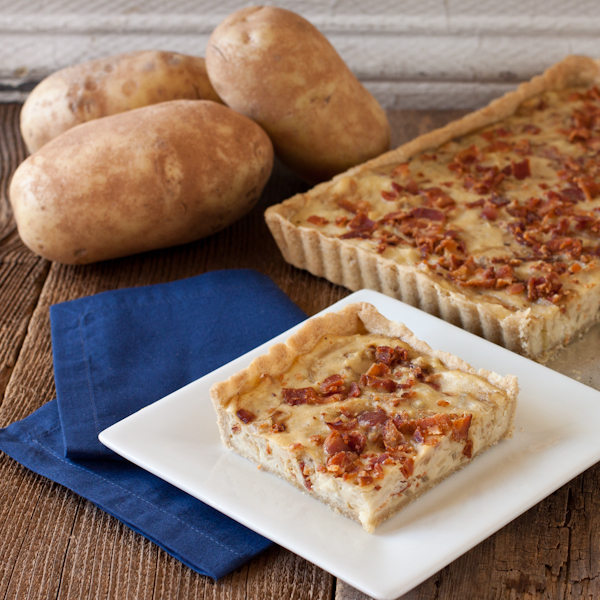 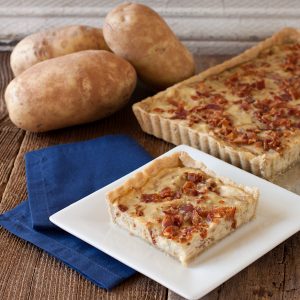 Per serving (tart cut into 9 pieces): Calculated with Whole Foods 365 reduced-sodium uncured bacon.
I have found a couple of brands of uncured, nitrate-free, high-quality bacon. One is especially low in sodium. If watching your sodium, look for bacon with less than 100 mg per slice. You can also use fewer slices if needed.