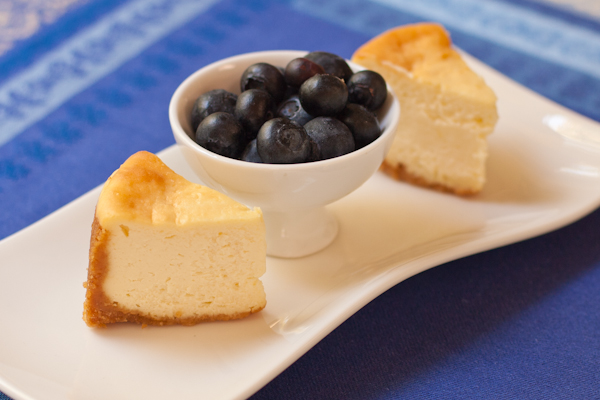 The story behind this cheesecake is a humbling story of generosity. And what better time to tell a generosity story than the week of Hanukkah and Christmas?

In August, I attended the BlogHer convention here in San Diego. I offered to host a gluten-free brunch for my food bloggie friends on the Sunday after the conference ended. We put the word out in various ways. I had a pretty good idea of who was coming.

The day before the brunch I was sitting at the conference when my phone rang. The Husband needed stitches, I was off to the ER, and it was clear that I wouldn’t be able to host brunch the next day. We spread the word that brunch was cancelled.

At 11:05 on Sunday morning, the doorbell rang. And my heart sank. I opened the door to see Cynthia, this beautiful, beaming woman, holding a tray of mini cheesecakes. Gluten-free, vegan cheesecakes. I was beyond embarrassed. I explained what had happened, apologized profusely, and felt like a total heel. She in turn was beyond gracious, so sweet, and insisted we take some cheesecakes. I took this photo as a thank-you, hoping she might be able to use it for her new gluten-free baking business.

I took her to lunch a few weeks later, and thoroughly enjoyed getting to know her.

In my mind, though, she was still The Woman I Stood Up, at my own house. It was a faux pas of major proportions in my mind, despite her total graciousness about it.

So imagine my surprise last week when she called out of the blue to tell me that she was putting her baking business on hold due to the demands of her new job. Did I want all of her gluten-free baking supplies? She had to clean out the commercial kitchen space she was renting, was moving to be closer to the job, and didn’t want things to spoil or go to waste. I said yes. Three hours later she was again at my doorstep, with two enormous bags of flour, sweeteners, and other goodies for me to use. It was at least two hundred dollars’ worth of supplies.

Now that is generosity.

May we all be as generous in spirit as my new friend Cynthia. Blessings to you during this time of light.

Today’s post is part of our mission to help you build a healthy life through food and lifestyle choices. Look for posts on Mondays featuring gluten-free, sugar-free recipes made with healthy plant-based ingredients.