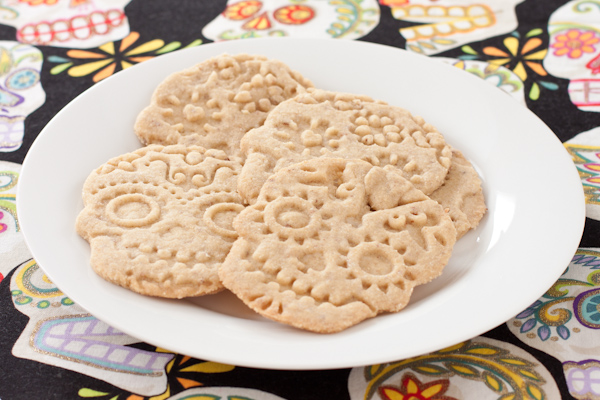 Thin and crispy sugar cookies usher in Halloween and one of my favorite holidays: Dia de los Muertos.

I first learned about Dia de los Muertos while working at Chicago Children’s Museum in the early 90s. We had a traveling exhibit called Oaxaca that completely captivated me: the artisan crafts, the food, and the wonderful tradition of celebrating lost loved ones. While here in the U.S. Dia de los Muertos might seem ghoulish, I love the idea of remembering my lost loved ones, creating an altar to invite them back for a visit, and preparing some of their favorite foods. While researching the holiday for the exhibit, we learned that there were special skull cookies, called calaveras, that were popular during the holiday in Mexico.

I was tasked with finding a bakery that would either share the recipe for calaveras or would make them for us. I spoke no Spanish and the only person in the office who was fluent happened to be Puerto Rican. They don’t celebrate Dia de los Muertos in Puerto Rico; it’s primarily a Mexican tradition. So, while Nancy spoke Spanish, she didn’t know the culture or the dialect involved. Nevertheless, she was gamely on the phone for me, calling the list of Mexican bakeries I’d found, asking if they made calaveras and whether they could share the recipe.

After calling eight bakeries, we were getting nowhere. People either didn’t understand what we were asking for or my research was way off. Finally, one of our Mexican teen staffers came in and helped resolve the mystery. She explained, “If you called a bunch of regular bakeries and asked for their Christmas cookie recipe, would they know what you meant?” Everyone gives their own spin to calaveras, which are sugar cookies in a skull shape, or round cookies with skulls drawn on them in icing. With her help we ordered many dozen sugar cookies and a tub of icing. The cookie decorating class was a smashing success.

The Husband surprised me by ordering these skull cookie cutters

, so I whipped up a batch of my sugar cookie dough to give them a try. I think they look better unglazed, but they taste delicious either way. It’s a little tricky imprinting them without the dough sticking to the cutter. I used a lot of brown rice flour when rolling these out. 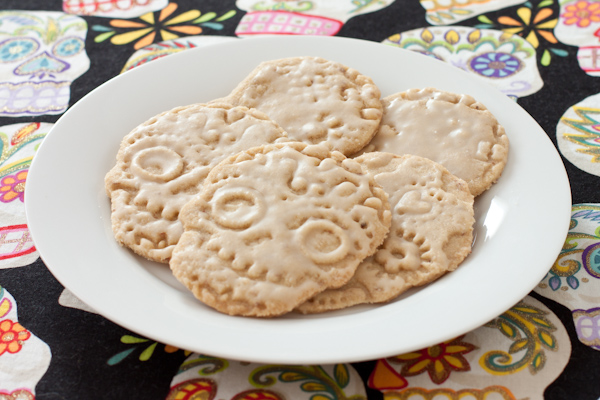 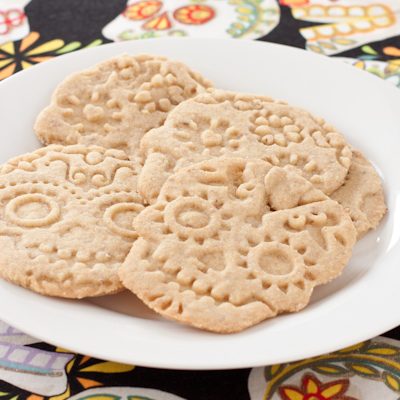 Per cookie (if making 36):   I buy certified gluten-free oats from Bob's Red Mill and grind them myself in the Vitamix. If you cannot eat oats, I can't promise that another substitution will work in this recipe.