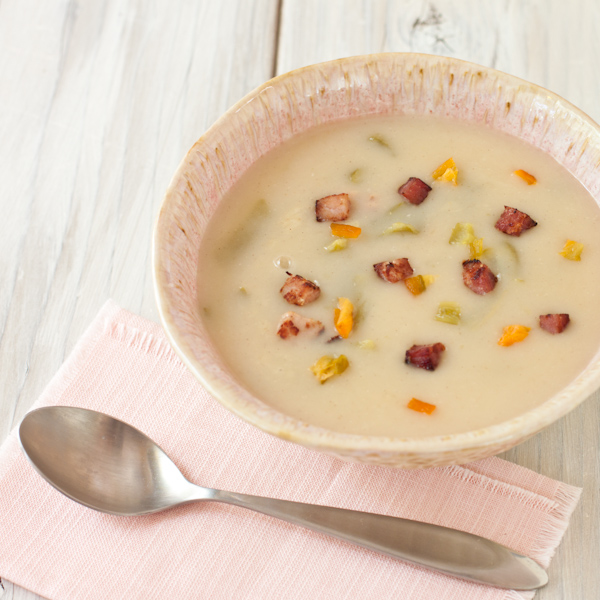 This creamy potato soup reflects the perfect confluence of ingredients: organic red potatoes, roasted Hatch chiles from New Mexico, and heirloom ham from a new company called Fork in the Road. The ham provides smoky notes and just enough seasoning, while the chiles add rich depth of flavor and a pleasant afterburn.

I was sent some frozen chiles from The Hatch Chile Store a while back, and promised them that I’d develop a recipe when I was back to blogging. They are also very generously providing the same frozen chiles in this Friday’s giveaway: 5 pounds of roasted, peeled, seeded, and stemmed chiles, ready to thaw and cook with.

Then, I found out about heirloom meats produced by a new company called Fork in the Road. I got in touch, and found out that one product, their uncured maple & honey ham, was low-sodium enough for me to test it. While I can’t eat it straight up (too much salt for my restrictions), its fantastic flavor is perfect to season a soup or omelet. Since it is uncured and contains no nitrates, it’s suitable for migraine diets. It does contain a small amount of maple syrup and honey, but that’s mainly on the rind.

This recipe is actually dairy-free, but you could also make it with whole milk if you use dairy. Most paleo diets don’t include white potatoes, but I still use them from time to time as potatoes are super high in potassium, which is important for my Meniere’s Disease. Using a measured amount of this specialty ham, 2 ounces, allows me to enjoy the flavor throughout the soup without too much of a sodium hit. It’s 124 mg of sodium per serving, with 800 mg of potassium per serving. You could omit the ham and use salt-free vegetable stock to make this soup vegan.

Not for:
vegan or vegetarian diets (unless you omit the ham) 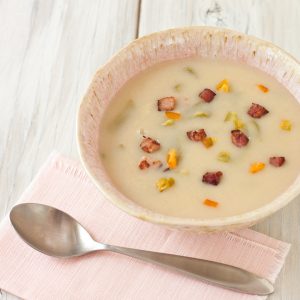 Per serving: Required FTC disclosure: I received the ham from Fork in the Road and the chiles from The Hatch Chile Store. I was not paid to write this post.