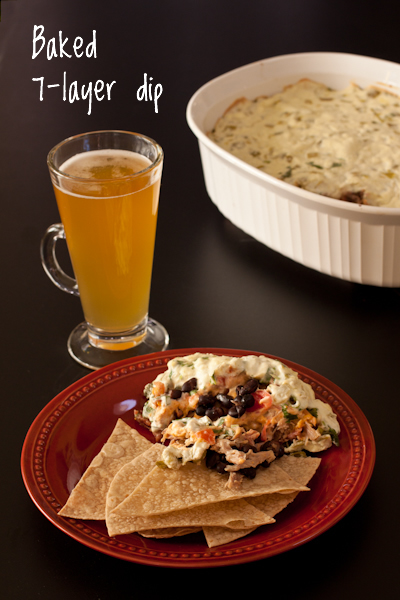 I made this baked 7-layer dip for the big game a couple of weeks ago. You know, that one. Where the coach inexplicably called for a passing play on the one-yard line and lost the game when the pass was intercepted. We’re not really into football, but I enjoy watching the ads and participating in this erstwhile national holiday. Here’s how I made it:

I used to make a big pan of nachos for the big game, the ingredients in the nachos morphed over the years as my diet has shifted. This year, I was going for no corn, more protein, and just a little bit of naughty. Cream cheese is allowed on the migraine diet, although it’s a bit higher in sodium than I normally eat. So that was my splurge. I made toasted brown rice tortilla chips in the oven, which were super-easy and perfect for loading up with dip. I didn’t think they would hold up well to becoming nachos, hence the baked 7-layer dip instead.

You could also use refried beans for the bottom layer; we both liked the color and texture that the black beans added to the dip. Layers of fresh veggies in the center lighten it up.

Vegans could use vegan cream cheese and (obviously) skip the pork layer. Paleo peeps and anyone avoiding dairy and processed foods could make a second layer of the smoky cashew sauce and just eat with a fork instead of a grain-based chip.

This is borderline low-sodium, depending on how much you eat, whether the chips have salt, and the salt level in the canned black beans, soy sauce, and cream cheese. If you are celiac, you should only use a certified gluten-free soy sauce or Bragg’s in this dish, which will have a much higher sodium count. The dark soy sauce I buy does not list wheat on the label, but there is no guarantee about cross-contamination.

Migraine diet notes: The smoky cashew cheese layer includes a small amount of dark soy sauce, which I can tolerate in small amounts but is a migraine trigger. Cashews are also a migraine trigger and are not recommended for people with auto-immune conditions, as they are related to poison ivy. Lemon juice, smoked paprika, and liquid smoke can all be migraine triggers. I have tested all these foods after being on the diet for six months and they are okay for me.

Not for:
low-sodium, migraine, vegan, or vegetarian diets 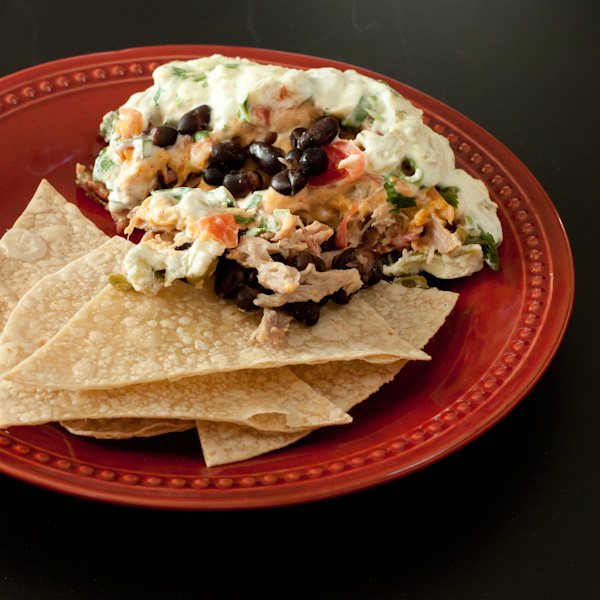 You might also like:
Party bean dip with baked tortilla chips from Cooking Light
7 layer Mexican dip (paleo) from The Nourishing Gourmet 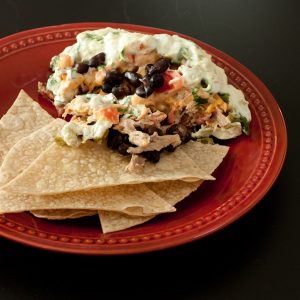