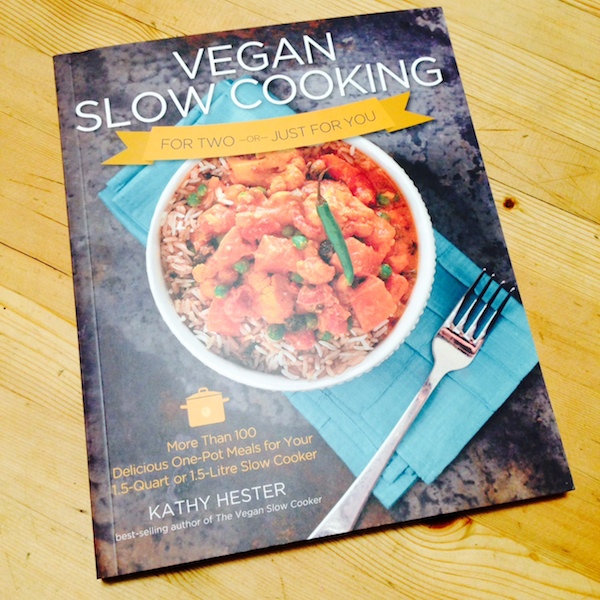 Delightful array of healthy meals for two, perfect for dorm rooms, singles, or couples in tiny apartments! Kathy Hester’s latest book is sized for smaller slow cookers and meals for one or two: Vegan Slow Cooking for Two or Just for You: More than 100 Delicious One-Pot Meals for Your 1.5-Quart/Litre Slow Cooker

I’ll start with a caveat: our slow cooker sucks. It’s about 20 years old and came into the marriage with The Husband. The Low setting doesn’t really work anymore, the High setting is maybe not that high, and the lid was accidentally exchanged years ago with someone else’s after a potluck, so it doesn’t seal completely. So if I had problems with some of the recipes, I totally blame my slow cooker and not the book.

First up, dessert! I made (and forgot to photograph) chai-spiced apple crumble, which we both really liked. Emboldened by the first recipe, and after a tough day, I tried making the giant chocolate chip cookie for two. This is where my slow cooker suckiness was an issue… it took forever for the thing to bake, and the texture was a little weird. Of course I ate it; it was a giant chocolate chip cookie. But I don’t think this was a fair test of the recipe, given that I had thrown together a quickie gluten-free flour mix, and my slow cooker’s High (only) setting is clearly off. While I personally would rather just fire up the oven and have a cookie in 10 minutes, I could totally imagine making one of these in my dorm room in college, had that been allowed. 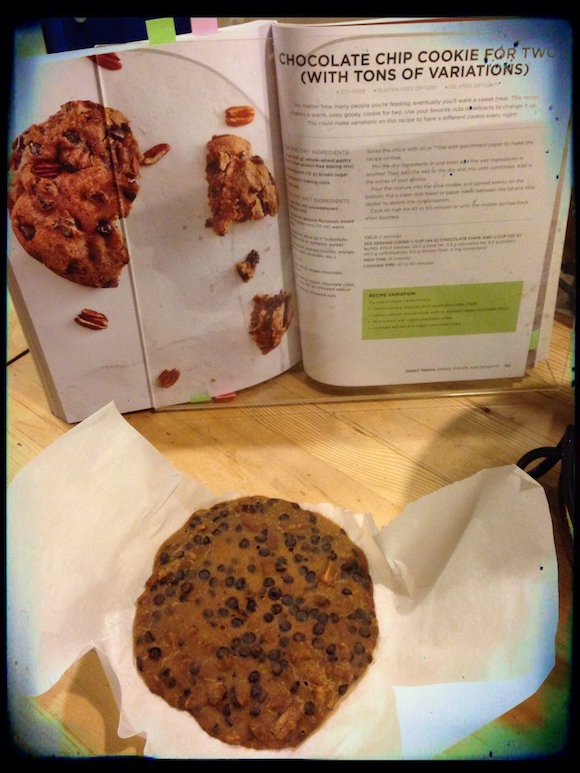 I decided to go healthier with my next choice, making curried cider winter squash soup. What an inventive combination! It takes the flavor of apples (which are often combined with squash), yet adds that edge that normally might come from beer or wine. Very easy to put together, and delicious. 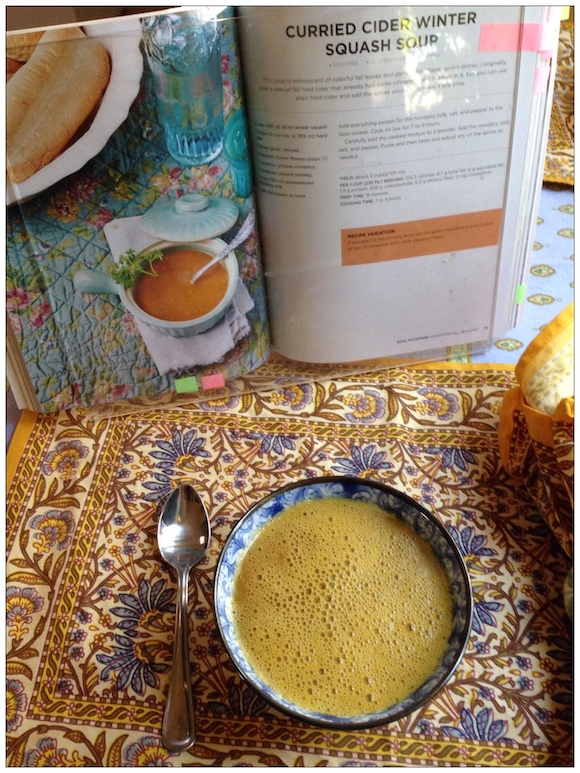 I was intrigued by the next recipe, the New England tofu rolls, as the recipe was so simple. Just tofu, Old Bay seasoning, and water… once cooked mix with celery, vegan mayo, and one or two other ingredients. I liked the flavor, but wondered whether it might work better if the tofu was grated, as it would absorb even more of the seasoning and have more of a seafood texture as a salad. Again, very inventive. 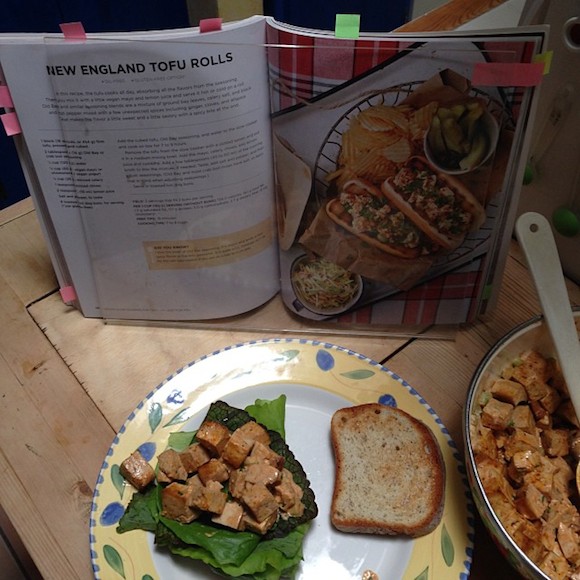 I often choose recipes to test simply based on what matches up with what’s in my pantry, which was the case for Indian sambar. I made the sambar spice powder first, easy and fragrant. I look forward to using it in other dishes soon. 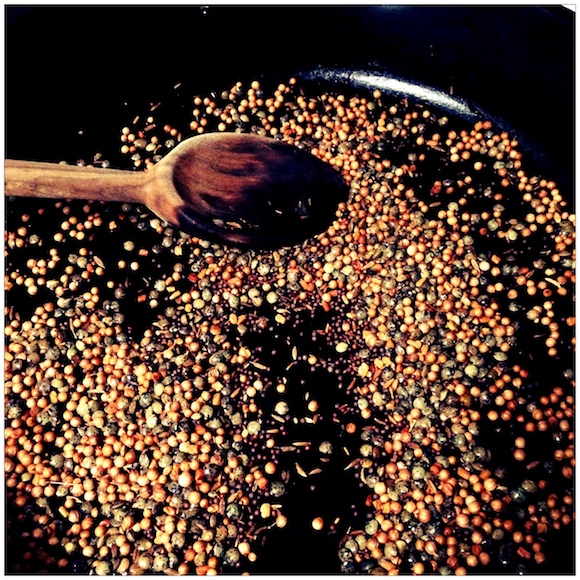 I had to substitute brown lentils for the split dal and a sweet potato for the potato, which I’m sure affected the final texture and flavor a bit. That being said, we both liked the dish. 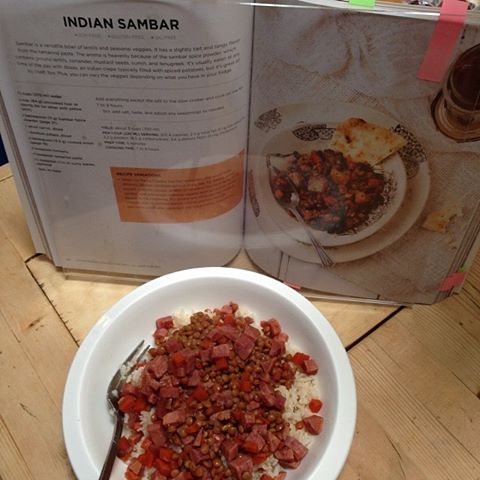 Finally I made green beans in black bean sauce with tofu. I had to make my own black bean sauce, as there is none available that’s gluten-free. For that Kathy sent me to Closet Cooking, where I adapted Kevin’s recipe. I wasn’t crazy about this dish, but don’t know if it’s because of my black bean sauce, the sucky slow cooker, or the recipe. 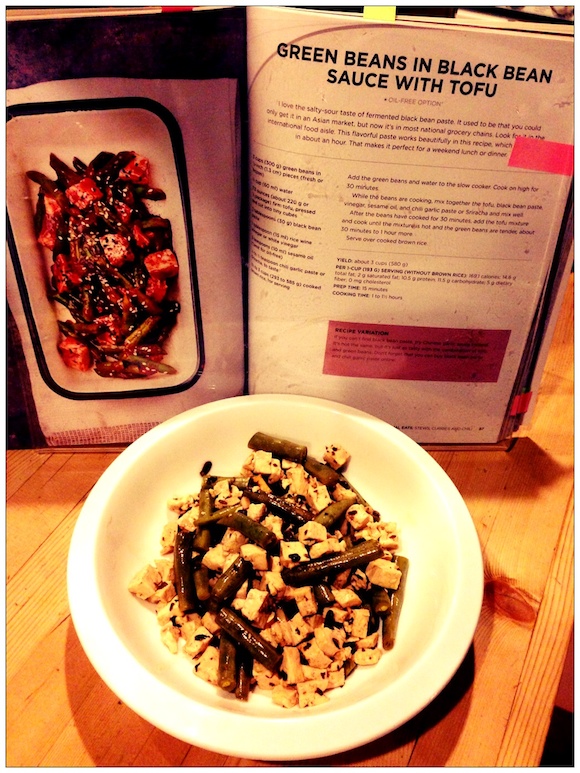 What I liked about this book:
Beautiful and appealing, excellent organization, easy to use, well designed. Gorgeously photographed. Clear instructions and a nice variety of recipes and ideas. Every recipe is labeled if it is gluten-free, soy-free, and/or oil-free, so it’s wonderful for a multitude of diets. Of the 104 recipes, 94 are gluten-free or have gluten-free alternatives, and roughly that many are soy-free or have soy-free alternatives. For people who don’t eat leftovers or who have no space to cook or store much food, it’s ideal.

I wasn’t so keen on:
One recipe was mislabeled as gluten-free (the white bean barley soup on p. 74), but I understand that has been corrected in the new printing. For me, the tiny serving sizes don’t make sense, as I love to put leftovers in the freezer. But that’s obviously the point of this book, so just know that if you like to make more, plan on tripling or quadrupling the recipes for a regular slow cooker. These recipes literally make two servings, no mas.

Recommended for:
Singles, couples, anyone with a teeny tiny apartment who wants fresh meals but doesn’t have space to store leftovers, college students.

Today’s post is part of our mission to help you rebuild your health through food and lifestyle choices. Look for posts on Mondays featuring gluten-free, sugar-free recipes made with healthy plant-based ingredients, Tuesday reviews, Wednesday essays, Thursday how-to’s, and Flashback Fridays recipe posts plus monthly giveaways on the last Friday of the month. We support Meatless Monday. Check out our new Meatless Monday blog hop.
Here’s the book for a closer look: