Low-sodium turkey dinner for two in the slow cooker 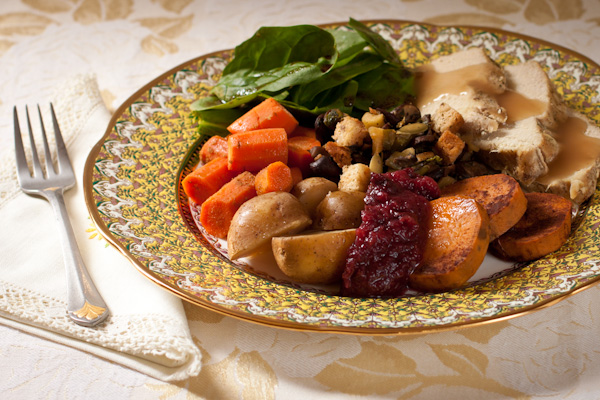 I tried this over Thanksgiving, as it turned out it was just the two of us for dinner. I wanted the whole meal without working for an entire day. Since I’m low-sodium, I couldn’t order a meal from a restaurant or grocery store. Could I do the entire dinner in the slow cooker?

Yes and no. I made the entire meal, except for the pie and cranberry sauce, in the slow cooker. It was WAY overcooked, since the internet led me astray.

I made the meal again to get the timing right. Some parts of the meal, like the turkey, I made several times, experimenting until I was happy with the outcome. It’s pretty cool to make turkey, gravy, and four side dishes all in one slow cooker. You put the turkey breast in foil, then foil packets with new potatoes, cinnamon-maple sweet potatoes, and cumin-carrots on top. The stuffing goes in for the last hour.

I tested the following methods for cooking the turkey:

All five tests involved rubbing the turkey breast with olive oil and spices before cooking. 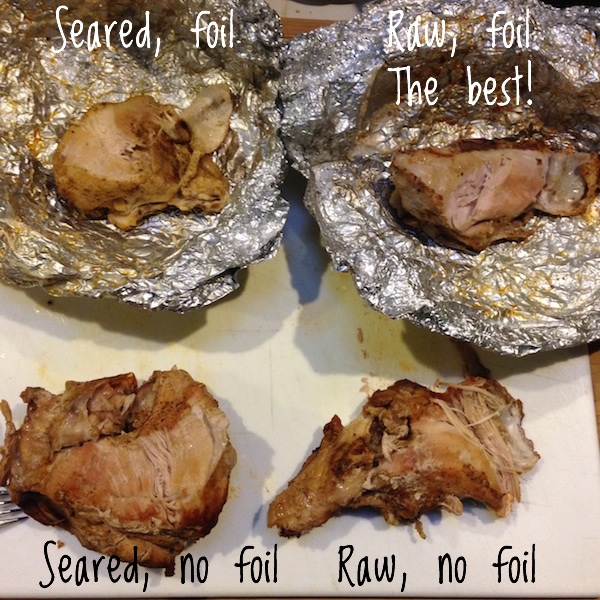 It turns out that the least expensive and easiest option (bone-in turkey breast) simply rubbed with olive oil and spices and wrapped in foil gives you delicious results. Winning! Have the butcher cut the breast into two or three pieces for you and wrap each piece separately.

This serves four people comfortably, possibly six with no leftovers and if you add bread or rolls. I also suggest adding a green salad, steamed green beans, or broccoli—something green and fresh. The nice thing is that each vegetable has a different seasoning, and the cleanup is simply recycling the aluminum foil and washing the slow cooker.

The prep for the entire meal, including making pie and whipped topping, was three hours the first time. When I made the dinner for the photograph, prep was under one hour. And it can all be done a day ahead.

Note, the entire meal cooks in four hours on low, so don’t leave the house for more than three hours (you need to add the stuffing after three hours). If you cook it longer, even on low, it gets very mushy. My newsletter readers will get a special tip this week for using overcooked vegetables.

You’ll need a large 6-quart slow cooker to fit everything in. Paleo eaters can omit the bread from the stuffing, skip the new potatoes, and use all olive oil if you don’t eat dairy.

Serve with cranberry sauce and your favorite pie, like my chocolate-bourbon-pecan pie.

low-sodium, migraine, gluten-free, paleo, reduced-sugar diets. You can skip the turkey and use olive or coconut oil for vegan and vegetarian diets. 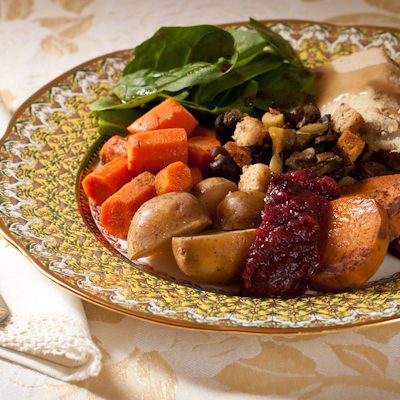 I can't give you accurate nutrition data on this, as it totally depends on how much of each item you take. It's going to be far healthier and lower in calories than a traditional meal, for sure.