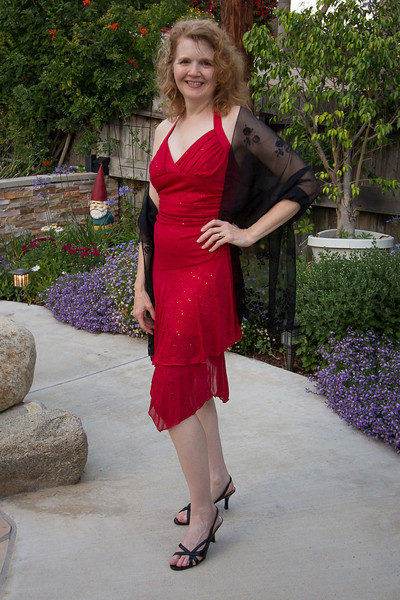 The photo was taken by the talented Arlene Ibarra at my friend Channing’s birthday party. The party, a surprise, was themed on the television show Revenge. The show revolves around a party in the Hamptons where the women are in red cocktail dresses and the men in white shirts. Channing loves the show, and had mentioned off-handedly to his wife that it would make a cool theme for a party.

We receive the invite for the party with the instructions for attire. Crap. Not only do I NOT have a red cocktail dress, I don’t wear red. Period. It clashes with my hair and I have never worn it. But Channing is a close friend and I assume (without knowing the story) that his wife has a good reason for the theme. I ask around. No one I know has a red cocktail dress. Screw it. I decide to wear black.

The day before the party it was nagging me, so I hit a thrift store to see what they had. In 15 minutes, I blazed through 8 red cocktail dresses, found a pair of strappy black sandals, and was out of the store. The only dress that really fit me was this one, which still reminds me of a Nancy Kerrigan ice-skating costume. But I looked okay in it, and something in me said…

I bought this dress and a pair of cheap Spanx. The whole outfit cost me just under twenty bucks (dress, shoes, faux-Spanx).

Why was this dress such a big deal, besides the color? Let’s see… I was just about to turn 51. I hadn’t worn a halter top since the late 70s. It was really form-fitting. It didn’t seem like me.

Since turning 50 I have been trying to push myself in new directions, embrace who I am inside and out, and I decided that this crazy sparkly dress was a symbol of that inner growth. But I had to own it.

So I did my hair, put on party makeup, and walked out of the bedroom. The Husband didn’t know quite what to make of it, as it was so “not me.” A bit of fear crept inside. Was I going to look ridiculous? Did I look like I was wearing a costume? What if no one else was in a red cocktail dress? It was too late to change, and I really had nothing else to wear, so we headed out.

The reaction from my guy friends at the party gave me my answer. They usually see me at dog park in a baseball cap and jeans, and they were extremely complimentary. I asked Arlene to take this photo of me specifically so I could share it with you.

I’m not posting this as an ego trip, although I think I looked pretty good, especially for 51.

I’m telling you this because that night, I embraced my beauty. I owned who I am. I broke out of my comfort zone and got some nice compliments for it. Yes, I have some wrinkles and yes my body’s not perfect. But that doesn’t mean I can’t throw on some Spanx, glam up for a night, and enjoy the way that feels.

And you can, too.

And that red dress? It’s still in the closet. You never know when I might need it.