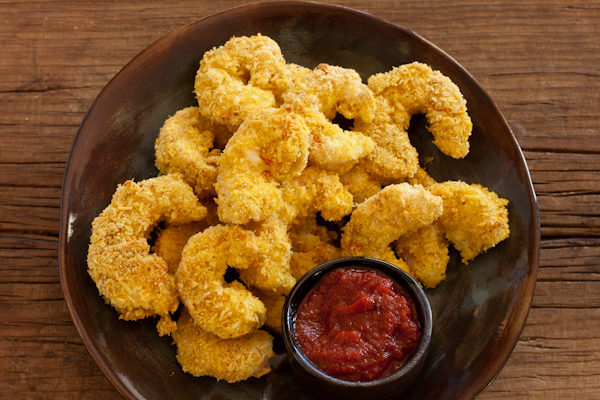 I haven’t had a yummy shrimp appetizer in a very long time. Restaurant shrimp appetizers aren’t gluten-free. I ate plant-based for four years. And last year, when my diet changed because of migraines and Meniere’s, I found out that shellfish tends to be naturally high in sodium. If you can find unbrined shrimp that’s wild-caught, and you don’t eat too much of it, shrimp is healthy and high in protein. Plus it’s delicious.

While researching my migraine diet book, I learned that only 10% of the shrimp eaten in the U.S. is U.S. farmed or wild-caught. The other 90% comes from shrimp farms in Asia and South America, which have much lower environmental and farming standards. They might be contaminated with antibiotics (banned in the U.S.) or antibiotic-resistant bacteria.

Even U.S.-produced shrimp has issues: nearly all is treated with sodium bisulfite, sodium tripolyphosphate (which quadruples the sodium content), and/or Everfresh (4-hexyl-resorcinol, a xenoestrogen that may increase breast cancer risk if ingested at high levels).

I decided to do a play on popcorn or coconut shrimp, making this recipe grain-free.

I had to try more than eight different methods for preparing the shrimp to get the crispy coating I was hoping for. I tried baking, broiling, and pan frying, with a variety of coatings and timings. Finally we have a winner. (Note that the photograph is from one of the earlier methods.) The spicy cocktail sauce was adapted from a recipe in Real Simple I had pulled a few years back. It’s pretty easy; make it ahead so it can chill. Or you can simply whisk some chili pepper sauce or Sriracha into mayo for a quick dipping sauce. 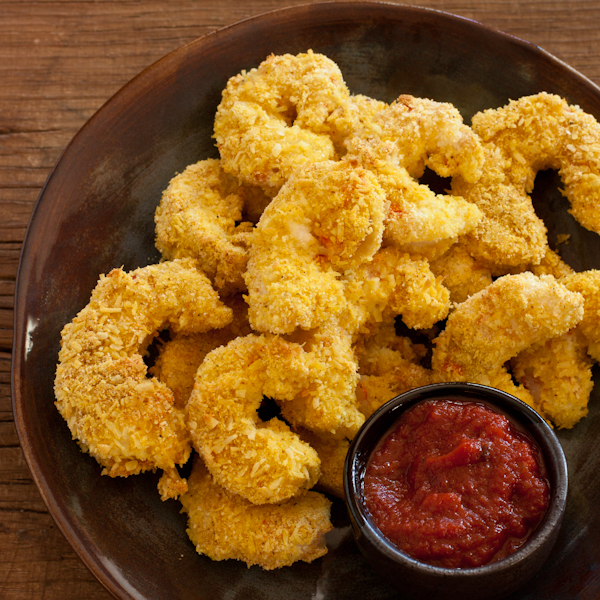 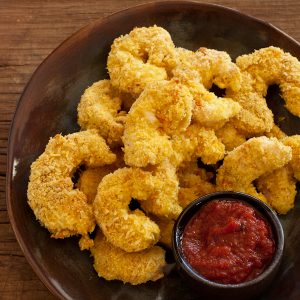