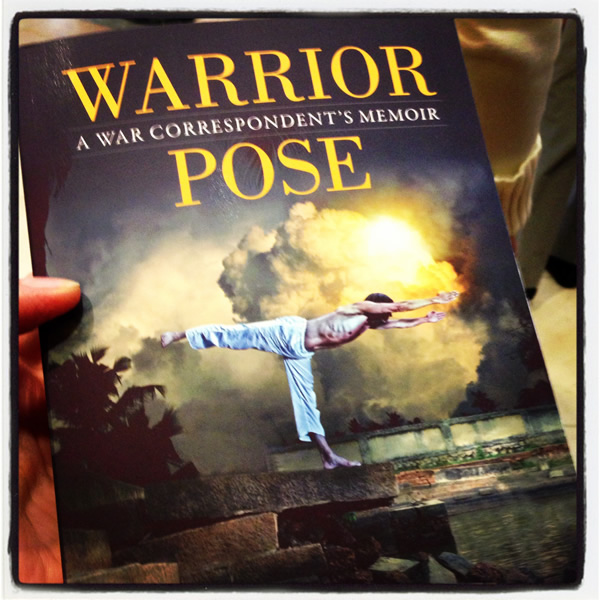 The man on the cover is my yoga teacher, Bhava Ram. Before he was Bhava Ram, long before I knew him, he was NBC News correspondent Brad Willis. This book, Warrior Pose: A War Correspondent’s Memoir

, chronicles his journey from the most remote, dangerous places in the world through an agonizing broken back, drug detox, throat cancer, and complete recovery. Part adventure tale, part spiritual journey, at its heart lies a love story.

Read on to find out why this is a perfect Father’s Day gift.

Many people reviewing this book will mention Bhava’s amazing journey. He literally has traveled the globe, had astounding access to some of the late 20th-century’s key historical events, living the rarified life of a well-paid foreign correspondent for NBC News.

His journey from there—a million dollar apartment overlooking glittering Hong Kong—through a crippling back injury, drug addiction, and terminal cancer diagnosis to become the man you see on the cover of the book is truly remarkable.

The book is framed in three sections. Dispatches is the external adventure tale, chronicling his journey from a small Northern California TV station to the mountains of Afghanistan with the mujahadeen, apartheid, Colombian drug wars, North Korea, and more. As I read my jaw dropped repeatedly, as this calm man I know from yoga class covered some of THE stories of the late 20th century. Despite a painful back injury, Willis kept up his hard-charging lifestyle, using pills and booze to mask the pain. When I asked him what his mantra was at that time, he didn’t hesitate. “I can work longer and harder than anyone else.” He kept charging until his back collapsed, sending him home to San Diego for a spinal fusion. The fusion failed.

Since I had the exact same injury (a fracture at L5/S1 and a crushed disc), I read this section with a combination of amazement and resonance, remembering what that pain felt like and what it was like to go through a similar surgery, wearing a brace for three months. In my case, my fusion succeeded.

In Section Two: The Abyss, Willis was in despair. His career gone, back surgery failed, and now a terminal diagnosis of throat cancer from the Persian Gulf War left him with nothing to live for except his new baby, Morgan. Willis is open, naked, in this section, hiding nothing about his terrible behavior or self pity. His mantra during this period was “Life isn’t worth living.” That changed when Morgan was two and made a simple request of him. “Get up, Daddy.” Morgan wanted him to come out and play. Pickled on drugs, crippled in pain, at least 50 pounds overweight, Willis couldn’t “get up.” But something about that request changed him, beginning a transformation that is detailed throughout the rest of the book, becoming his life-affirming mantra.

Eventually, Willis found yoga (Section Three: Yoga) and for people dealing with life challenges, he shares in great detail exactly how he structured his life for the goal of healing. He tried everything, including the most radical aspects of yoga, but drew the line at drinking his own urine (a far-out practice described in an ancient yogic text). And slowly, he transformed into the man on the cover… free of pain, free of cancer, 85 pounds lighter, able to carry Morgan on his shoulders for the Christmas parade. He changed his name to signify “Pure State of Being in the Heart,” and that is my experience of him.

It was my joy to coach Bhava to share his story with TEDxSandDiego last year:

What struck me most about this book was the deep, passionate, abiding love he has for his son Morgan. It was this love, more than anything else, more than his love for his first wife, or his work, or himself, that drove him to find a way to heal.

It’s rare to see a man write about this love and this bond in such a raw and intimate way.