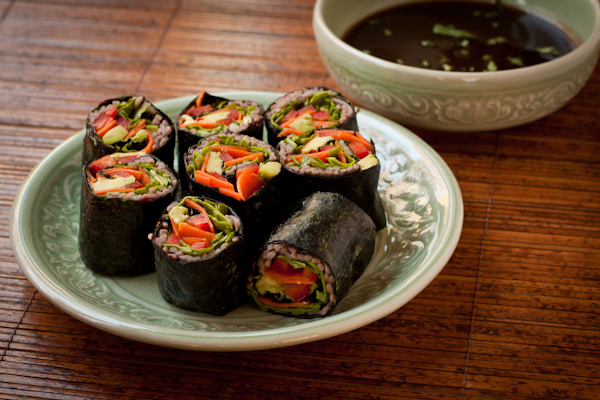 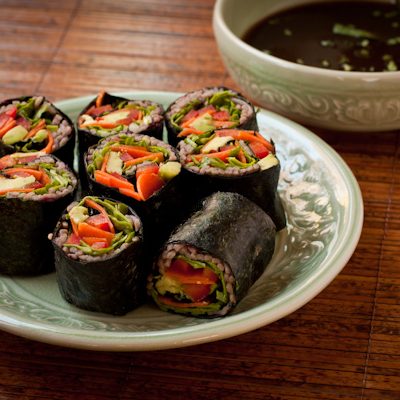 This fun vegan cookbook inspired me to make sushi for the first time. Delicious recipe, and a lovely book: Blissful Bites: Vegan Meals That Nourish Mind, Body, and Planet.

I was excited to receive Blissful Bites

by Christy Morgan, The Blissful Chef, and have enjoyed reading through it. It would be a terrific book for someone who wants to eat more vegetarian and vegan meals, as the opening section on setting up your kitchen and the ingredient overview would be extremely helpful to this way of eating. It would also be great if you are allergic or sensitive to onions and garlic, as all of her recipes are made without them.

What I liked about the book: Nicely organized, focusing on eating seasonally. Lots of attractive color photos. Very creative recipes. Lots of gluten-free and raw options. She also points out low-oil and soy-free recipes as well. Excellent primer on setting up a vegan kitchen. I’m planning on trying her Mock Tuna, Macro Mac ‘n Cheez, and Basil-Cashew Cheeze Sauce. The almond sauce and Love Your Heart Beet Soup are awesome! 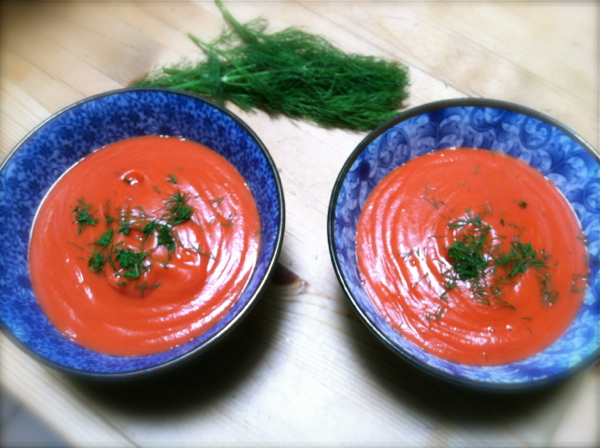 I wasn’t so keen on: The color coding and multiple icons got a little confusing. While I understood what she was trying to do, it ended up being a bit less user-friendly than intended. The recipe I tried was missing a step in the instructions; I hope the rest of the recipes are complete.

I tried her Soba Noodle Sushi with Apricot-Ginger Dipping Sauce, while making a few changes because I was missing some ingredients. (I also really don’t like collard greens, so I subbed Swiss chard.) It made a fun and relatively quick lunch, and the sauce was just amazing. I liked the creativity of using the soba noodles, but probably would use rice next time, as the noodles were tricky to work with.