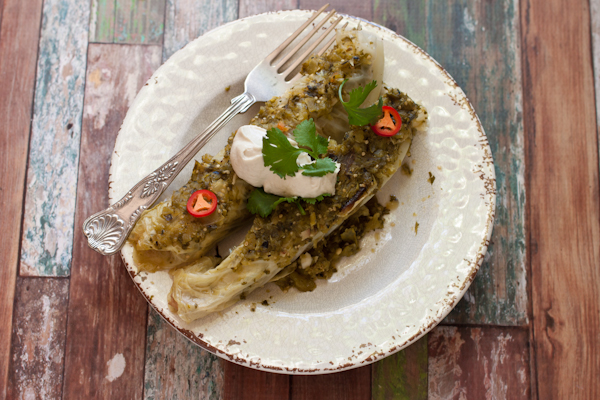 I have just finished doing my first Whole30® paleo cleanse with some friends and I am feeling better than I have in a long while. So much better that I’m continuing on, doing my best to stick to the Whole30® tenets: no grains or legumes, no dairy, no alcohol, no sugar. I’ve also been experimenting with avoiding nightshades. (Nightshades can be inflammatory foods and I seem to be sensitive to them. Nightshades include white potatoes, tomatoes, peppers (all kinds), eggplant, and tomatillos). I made this recipe right before finding out about the problem I was having with nightshades. I also learned I’m sensitive to the protein in eggs and dairy, so I cut both out of my diet again.

These aren’t really enchiladas. I took the spirit of enchiladas and used Savoy cabbage leaves to replace the tortillas for a grain-free option. These are paleo and Whole30® compliant. They aren’t super pretty but they are delicious; even better on the second day!

I was inspired by a chicken enchiladas recipes in Cooking Light as well as their stuffed cabbage recipe. Savoy cabbage has a delicate flavor that doesn’t overpower the recipe. Plus, cabbage is used in Mexican food, so it seems to fit. The outer cabbage leaves are boiled for two minutes to soften them, then patted dry. The rest of the cabbage is finely sliced or chopped. Depending on the size of your head of cabbage, you may end up with extra cabbage for another dish.

Note that I suggest doubling the amount of cashew sour cream in the recipe below… If you double it, add half to the chicken mixture before rolling the enchiladas and leave half for dolloping. This will provide a creaminess to the filling that would normally be provided by cheese. You can buy store-bought salsa verde or make mine, just omit the avocado in mine for this recipe. Here’s a fun little video of me making salsa verde from Melissa’s Produce tomatillos and garlic, and frozen Hatch green chiles from The Hatch Chile Store.

Required FTC disclosure: I received produce from Melissa’s Produce and The Hatch Chile Store; I was not paid to write this post. 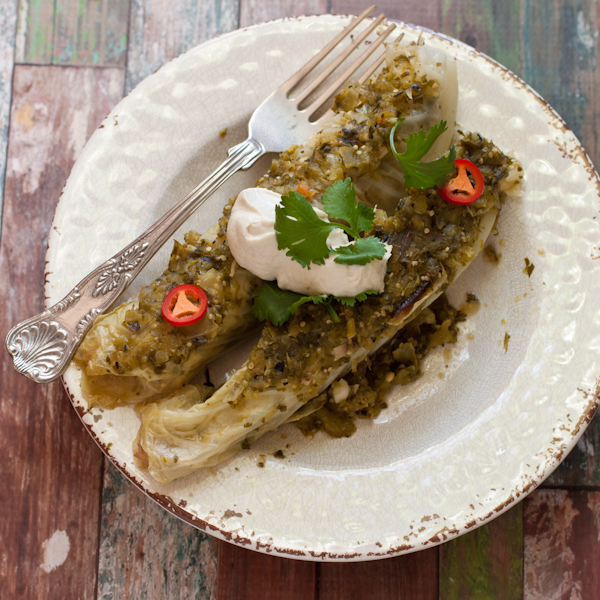 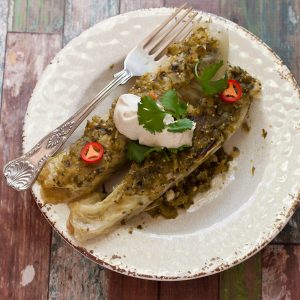