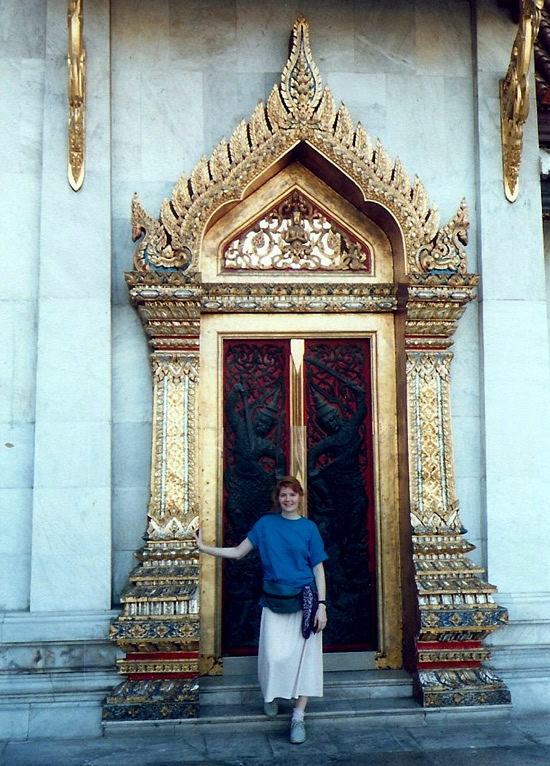 Me in Bangkok, in front of one of dozens of identical Thai temples that I visited. Yes, I really did wear that big baggy skirt and those sensible shoes.

When I was 28 I took the trip of a lifetime, a Circle the Pacific two-month trip. I saved for two years and skipped buying a car for two extra years in order to go. I had been collecting friends overseas and finally decided to take the plunge.

I would have loved to stay longer (six months) but couldn’t afford to be out of work for that long.

My trip took me to Hong Kong (via the San Francisco airport, where it really sank in that I was doing this), Hong Kong and Macau, Bangkok and Chiang Mai Thailand, Singapore airport, Jakarta and Yogjakarta on the Indonesian island of Java, and Sydney, Australia. Read on for photos and what I took away from this trip.

While I had grown up traveling, we were campground people, not overseas people. It took me a while to listen to my urge to take this trip.

Life lesson #1: You write your story. If you don’t like your story, you can change it.
I realized that, whether I felt like I deserved to go, or was “one of those people who doesn’t take trips like this,” those voices in my head could be quelled by the simple act of doing what I really wanted to do. So I created a budget, saved for two years, and bought my ticket. Arriving in Hong Kong was dizzying and overwhelming, but thankfully my friend Vijay was there in the sea of faces. At that time, the Hong Kong airport was still smack in the middle of the city, so we literally walked to our guest house from the airport, toting my big suitcase and backpack.

Cheung Chau island from Victoria Peak, Hong Kong. Lots of ferry rides on this portion of the trip.

Life lesson #2: Plan a little, then let go.
I spent a few days wandering around Hong Kong. Buying a bus ticket and riding a bus around the city (just a regular city bus, not a tour) was a great way to get away from the throngs of people and see the architecture. I went to Macau for the day, which was hot and dirty and not fun, so I bailed and went to a nice hotel and had lunch. I was not yet in the habit of taking photos of my food, or I would be able to show you the amazing seafood pasta dish I had. It came complete with whole baby squid, which I carefully tucked under the edge of the bowl out of sight.

I found myself ordering food by pointing at what locals were eating and pantomiming “me too.” Often, I would not get what I ordered, as they seemed convinced a foreigner didn’t really want to eat that.

After a few days in Hong Kong we headed over to Cheung Chau island, a little commuter suburb with no cars. My friends were attending a missions conference, so I was able to stay with them at their conference center, meet a bunch of nice people, and continue my jaunts while they worked. 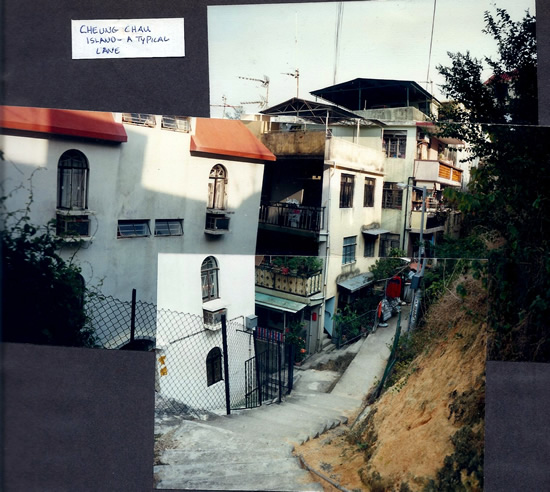 Cheung Chau was hilly, so every trip out by ferry involved a hike down to the bay. I loved seeing behind the scenes into people’s real lives.

At the conference we met some people from Bangkok who were happy to reserve us a spot at a guest house and meet us at the airport. Scary problem solved!

Life lesson #3: Trust that people will help you.
We spent several days in Bangkok with these new friends, who took us around, helped us order amazing food, told us about the culture from their perspective, and got us fixed up with our train tickets to Chiang Mai. Bangkok was oppressively hot and incredibly polluted, but with their help I had some amazing cultural experiences. I remember one shower after a day riding in tuk tuks, where my washcloth was literally black from the airborne dirt. (When I went back to Bangkok in 2002 the new elevated train was a welcome addition to this impossible city.) 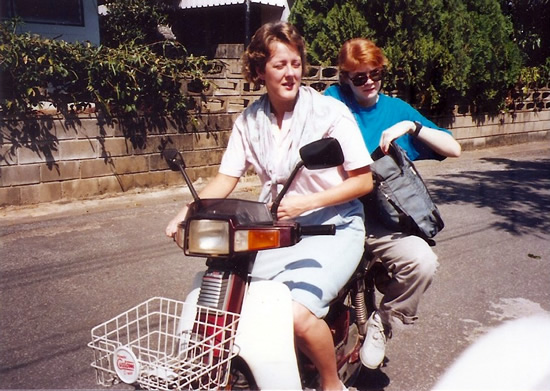 On the overnight train up to Chiang Mai I had a great conversation with my table companions, impossibly delicious food cooked by the porters, and my own snug sleeping berth in the air-conditioned car. It was awesome.

I spent a week with my friend Natalie, who was doing coursework in biomedical illustration at the University of Chiang Mai. She had a sweet little apartment complete with geckos, a scooter, and fun friends. We tooled around the countryside.

As the trip progressed, I found that my inner image of myself was changing. I was becoming a brave person, an adventurer, a world traveler. It was this girl who decided to rent a bicycle one day and ride to a nearby village known for their cotton weaving. More delicious meals, no photos.

After my Thailand stint, it was on to Indonesia with a layover at the fabulous Singapore airport. I had been gone a month now and was feeling very worldly at this point, although I look like a baby in these photos. In Jakarta I met up with Rick, who had been a member of my church in Chicago and now worked with an oil company. At a 4th of July picnic he had offhandedly mentioned that he had a big house and was always open for visitors. I warned him that I would take him up his offer if he was serious. He was, and I did.

The only moment that truly gave me pause on the trip was after I arrived at his swanky house. While he dated a friend of mine, I didn’t really know him. He had servants and a driver and barbed-wire-and-broken-glass-topped walls. I wondered, “What was I thinking?” Rick was up for a trip around the island, and planned an itinerary for us. He casually asked whether I want to share rooms in the guest houses or not. 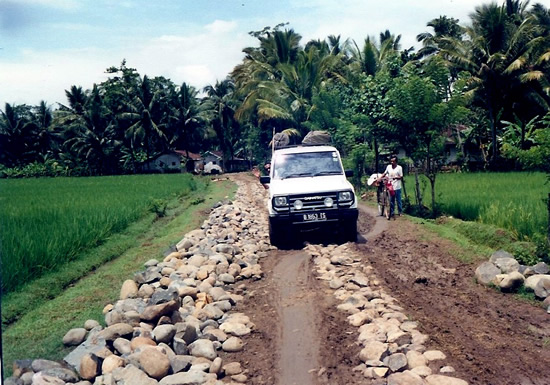 Our shortcut off the regular roads took us through villages that had not seen a Range Rover, or foreigners, in a long, long time. Some of the kids were scared of my skin and red hair. 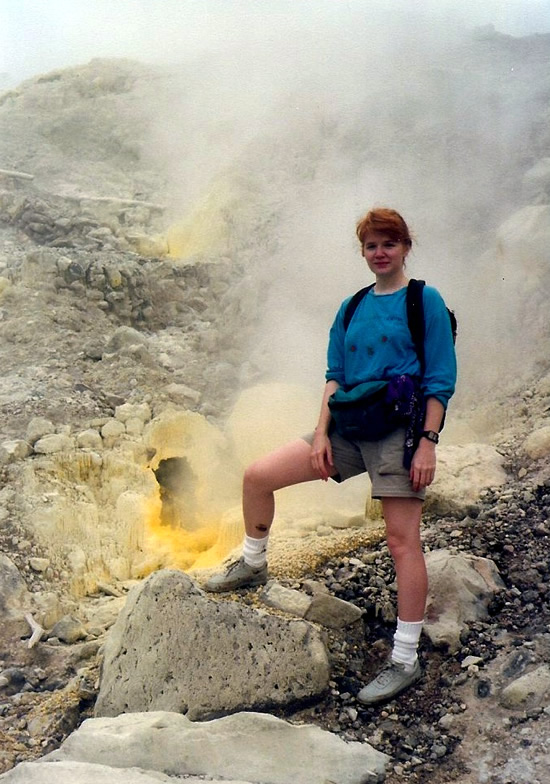 He took me to hike a volcanic crater, complete with sulfurous steam and active vents. 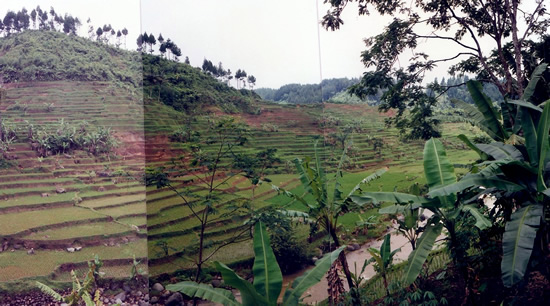 He took me past the most beautiful places I had ever seen, these stunning rice terraces. 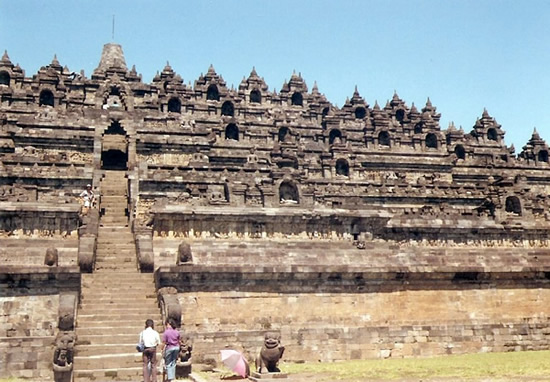 He took me to Borobudur, a breathtaking Hindu temple complex. Not his fault that I got sun poisoning.

I learned a lot about myself as we got to know each other. One day I offered him some of the snacks I had bought. He said, “Oh, you don’t like those?” I asked him what he meant. “You only offer me the stuff you don’t want.” I was outraged at first, thought about it, and then busted out laughing, realizing he was right. We bickered like brother and sister, although there was an attraction there. But I kept my distance, only to find out when we returned to Jakarta that he had a sweet young Indonesian girlfriend waiting for him that he neglected to mention. For ten days.

Life lesson #4: Trust your gut.
From Jakarta I flew to glittering, modern Sydney, which looks exactly like my now-hometown of San Diego (La Jolla especially). It was wonderful to get a haircut, hot showers, and eat out with my friend Judy and her pals. I took some day trips, sailed on The Bounty, and hiked with Judy on the weekends. 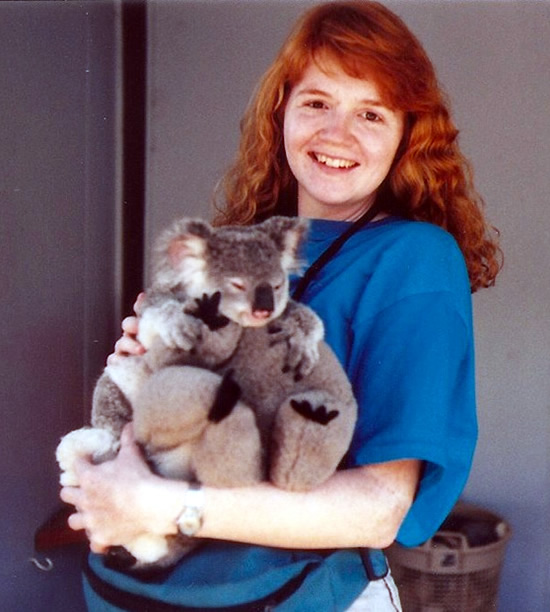 Me holding a live koala (right side up) on top of a stuffed koala (upside down). To my right is a line of tourists waiting to be handed the koala/koala combo.

I’ll end with this photo, which completely captures how I felt at the end of this trip. I have just reached the top of a pretty steep hill after some creative bushwhacking. I’m wearing a shirt I bought from a beach vendor for a buck. The world is my oyster. 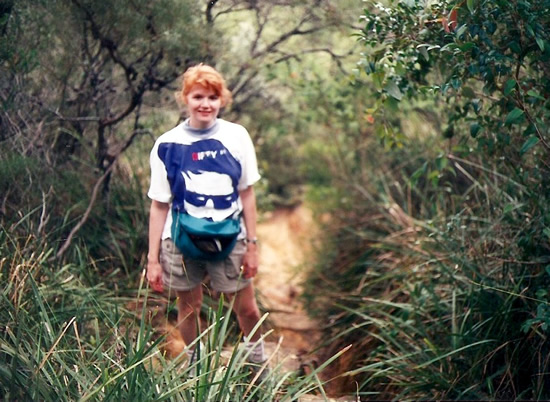 Postscript: The biggest gift of this trip was the change I felt in my core self-image. I became more confident, more interesting to myself and others, and more in tune with the greater world. I also ate some incredible food, which I am certain influenced me as a cook and led me to start this blog. I am also still friends, 23 years later, with Vijay’s family, Natalie, and Judy.