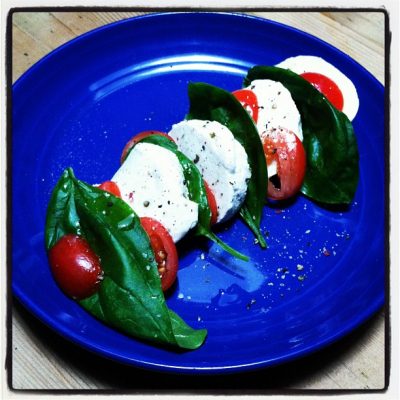 I can’t think of a more perfect way to end the Vegan Month of Food AND October Unprocessed than with this giveaway of Artisan Vegan Cheese: From Everyday to Gourmet

. I found out about this cookbook by reading the cover story in VegNews last month, and introduced myself to Miyoko after trying two of her amazing recipes.

If you have thought about going vegan but didn’t think you could live without cheese… these cheeses will blow your mind. They’re rich, creamy, and complex. Miyoko has been making vegan cheese for more than thirty years, but it was only in 2010 that she set out on a quest to make cheeses that would satisfy omnivores and vegans alike. After a full year of experimentation, she produced this book. If you’ve been doing the vegan or plant-based thing for a while, you’ve probably at least made cashew cream or “ricotta” like I used here in this vegan lasagna recipe.

How these cheeses differ is that they are cultured, either using a grain-based beverage called rejuvelac or non-dairy yogurt. They age from a few days to a week, depending on the type of cheese you are making. For some of the quick cheeses, like her Alfredo Sauce, dry white wine adds that cultured flavor (because wine is fermented). The book was edited by Jo Stepaniak, author of The Ultimate Uncheese Cookbook 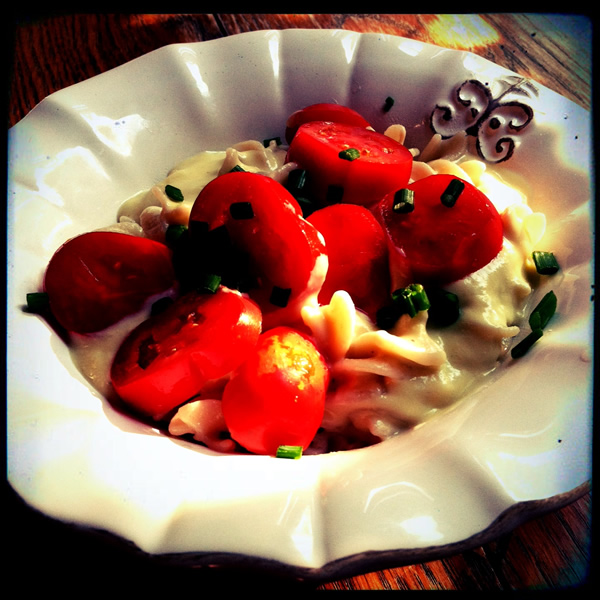 What I liked about the book: The book starts with an explanation of cheese-making in general, then segues into how the dairy substitutes work. Miyoko focuses on cultured cheeses, which take some time to age, thus providing that rich cheese-like flavor we crave. After testing four recipes I feel confident that her recipes are well worth the time and effort. The latter part of the book is filled with recipes that incorporate the cheeses, and provides lots of creative ideas. Note that I did have a recipe fail because I didn’t follow her instructions, so no renovating here!

I wasn’t so keen on: My only real complaint is that the book doesn’t have many color photos, and the light brown text and font choices make it hard to read without my reading glasses. I am willing to overlook those flaws as I’m so excited about the recipes.

I have tested four recipes from the book. I made Sharp Cheddar, which was so incredibly tasty I ate it plain and on sandwiches. The Fresh Mozzarella (shown in a caprese salad, above) was a tiny bit grainy but definitely had that rich creamy texture of fresh mozzarella and was also delicious on hot pasta. I loved the Alfredo Sauce: any time I am craving mac and cheese I will make it. The sauce was done long before the pasta was cooked, so it’s a meal in 20 minutes. I tried the Air-Dried Gouda, oversoaked the cashews, and had a mold problem. However, even with all that, it tasted freakin’ amazing so I will make it again and follow her instructions precisely. Totally my fault. 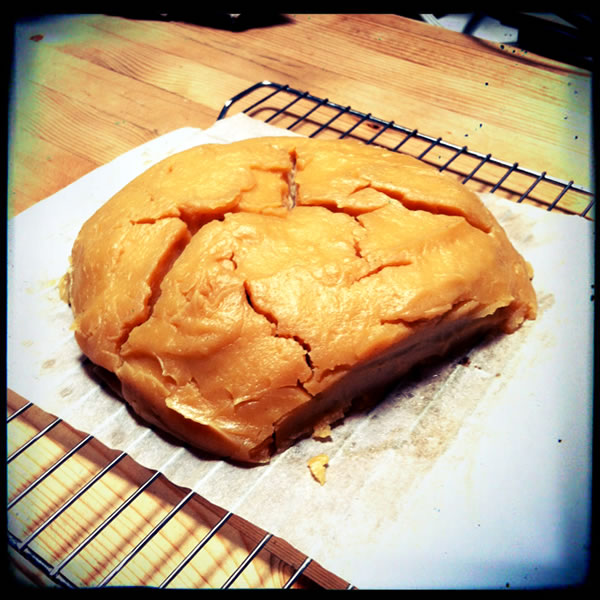 A cautionary tale: no renovating! Don’t oversoak the cashews! And if an air-dried cheese cracks like this, it will mold inside the cracks. Very sad to put this in the compost, especially after tasting the edges.