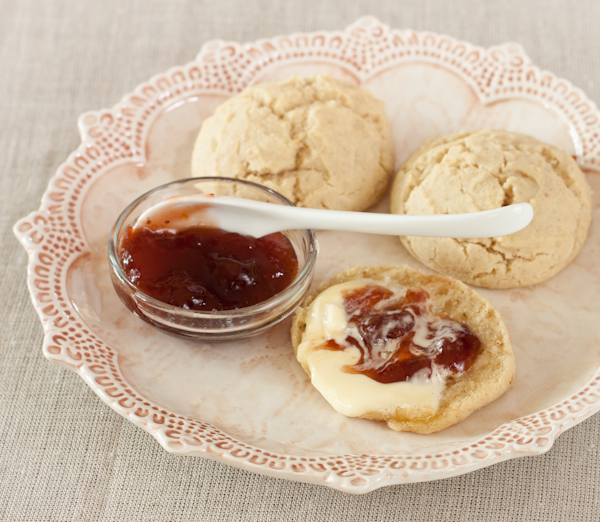 These innocent looking biscuits nearly drove me mad. I had to make this recipe six times before I got them right. I nearly gave up. But I was determined to win. No little biscuit was going to vanquish The Renovator! The end result—buttery, tender biscuits—was worth it.

This started out as a Cooking Light recipe renovation. I used to love biscuits-in-a-tube when I was a kid, and hadn’t tried making gluten-free biscuits. I started with their recipe for fluffy buttermilk biscuits, intrigued by the idea that you didn’t have to cut in the butter, but melted it and added it to the buttermilk. I used organic Earth Balance spread and made buttermilk from soy milk plus apple cider vinegar and salt. I also had to figure out which gluten-free flour combination would give the best texture. I made biscuits that had delicious texture inside but were flat as pancakes: 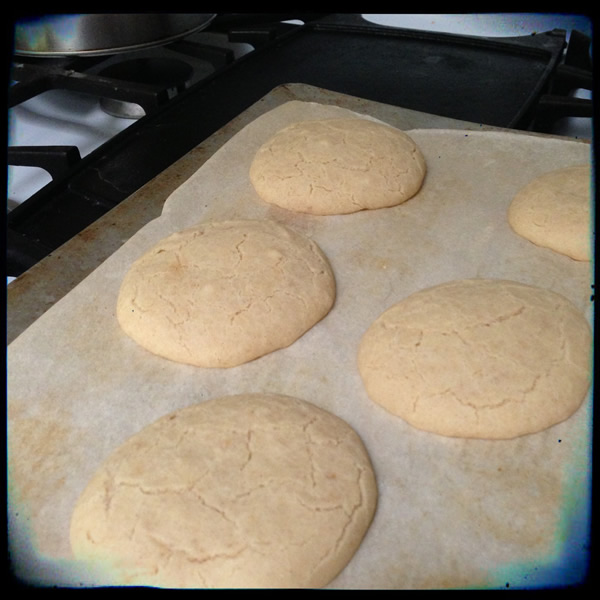 I made biscuits that looked perfect on the outside but were gummy and chewy on the inside: 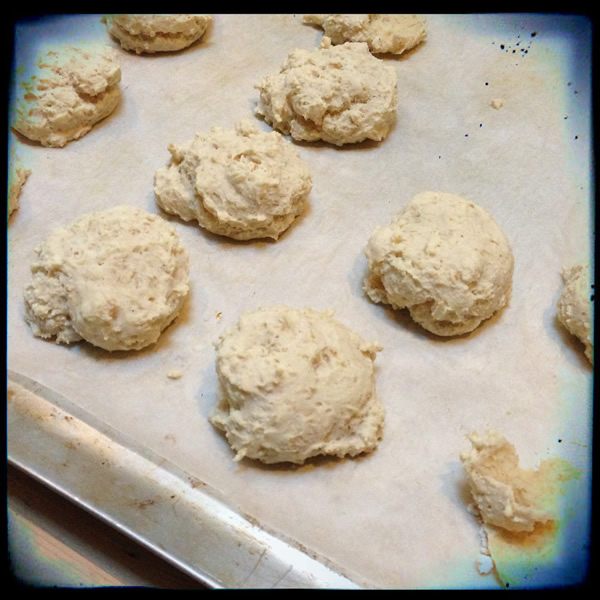 I went back to Gluten-Free Baking For Dummies

for ideas (reviewed here). I changed my flour formula three times. I realized that I had cut in the margarine too finely:It should still look like small peas (or really, aquarium pebbles, but that doesn’t sound as appetizing. But what are “small” peas? Aren’t all peas the same size? But I digress.)

When you cut the margarine or butter in too finely, there aren’t pockets of fat that will expand in the hot oven. That’s what gives biscuits their flaky texture. I gave up on the Cooking Light technique of melting the butter and mixing it with the buttermilk, as it didn’t seem to be working with my recipe.

Using a tip from Gluten-Free Baking for Dummies, I let the dough sit for ten minutes to allow the gluten-free flours to absorb the moisture and let the psyllium husk fiber do its work creating structure. That created scoop-able dough. 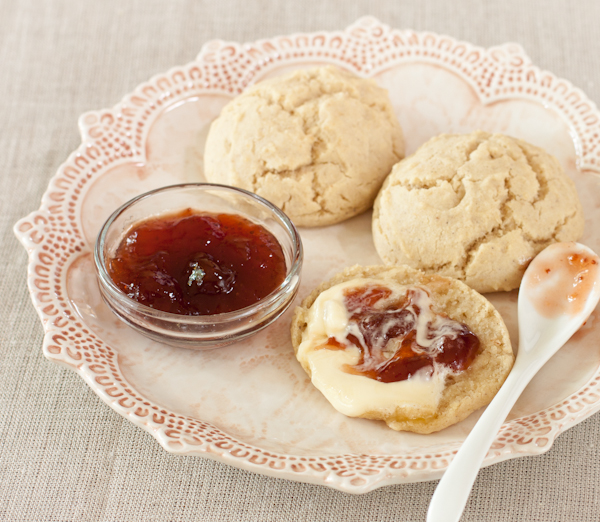 For other gluten-free biscuits, try:
Simply Gluten-Free
Gluten-Free Girl and the Chef

All of our recipes are gluten-free, refined-sugar-free, and made with plant-based ingredients to help you build a healthy life. We support Meatless Monday. Look for Tuesday reviews, Wednesday essays, Thursday how-to’s, and Friday giveaways (when available). 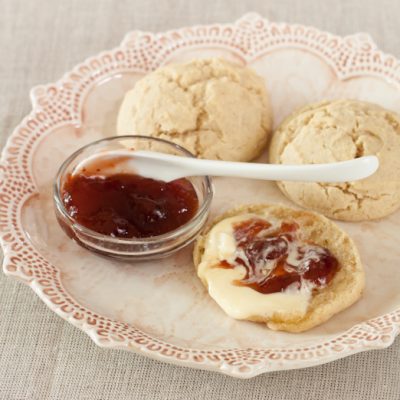 Per serving: Since it took me six tries to make these, do not make any substitutions in this recipe. If you want biscuits, get these flours. Do not omit that tiny little teaspoon of psyllium husk fiber. It is essential for creating the dough structure. Unfortunately, soy milk is the only non-dairy milk that curdles properly, so I can't suggest a substitute for you non-soy people. With that said, you can try to reduce sodium further by using low-sodium soy milk (some are as low as 15 mg per cup, some are as high as 180 mg), use unsalted vegan butter if you can find it (or make it yourself using this recipe). This should bring the total down to about 125 mg per biscuit. I have not tested this recipe with these changes, so I can't be certain it will work.