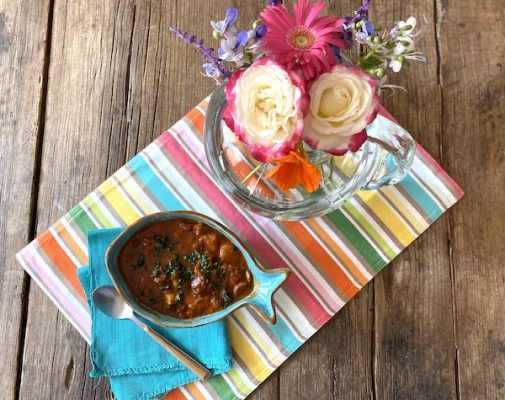 I love that my show The Blue and Yellow Kitchen has taken me on a culinary journey all over the world! This stop, Bermuda, for a classic fish chowder that shows both the British and trans-Atlantic slave trade influences. If you’re like me, you might think Bermuda is in the Caribbean. But it’s actually much farther north, directly east of North Carolina. The islands were uninhabited when the British arrived in 1612. The original settler families still have great influence over the island and its food products, include Outerbridge’s Devilishly Hot Sherry Pepper Sauce

The book that inspired this dish is Censorettes

, by Elizabeth Bales Frank. Censorettes is based on the true story of British women who were stationed in Bermuda during World War II, working for the British Intelligence Service intercepting mail between Europe and the U.S. It’s a fascinating fictional tale of four young women who become friends and deal with a variety of challenges in Bermuda and beyond. I totally could see this book as a BBC mini-series. Who do I call to make that happen? 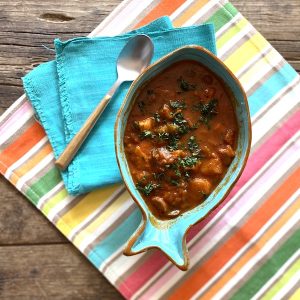 A note about the fish: Recommended fish include grouper, snapper, cod, haddock, and sea bass. Do not use halibut, tuna, salmon, or other fatty fish. If you have access to a whole fish, remove fillets and reserve for later. Simmer head and rack (fish skeleton) in step 1 for 2 hours before proceeding with rest of recipe. This produces a rich fish stock that would be more authentic. Remove head and bones before adding cubed fillets in step 5.